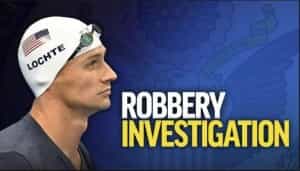 Any Brazilian or anyone who has been to Brazil knew that Ryan Lochte and friends’ story couldn’t be true. 1. Because he said they didn’t take his cell phone. That would be the first thing taken, and 2. When he refused to comply with the robbers order to get own on the ground, he didn’t get shot.

Even me as a pseudo-Brazilian (USAmerican married to a Brazilian for 20+ years) knew there were two things (at least) that were unbelievable about the Lochte story, including that they didn’t steal his cell phone and they didn’t kill him.

The Brazilian news source Epoca reported (a “loose” google translate translation, not meant for professional use) “The investigators were surprised both the version of swimmers: the thieves have not taken the cell and the assault of the target to be a taxi. Both situations are contrary to the statistics.”

I didn’t know taxi assaults were a red flag, but for me the other thing that did not ring true at all was that Lochte wasn’t shot when he refused to obey the robbers’ orders. In real life is casual “Whatever” bravado, while sounding very cowboy USAmerican, would definitely have gotten him shot.

The Brazilian sense of humor is sharp and witty, and really no topic is off limits when talking about their own country. But let someone else do it? Forgetaboutit! People, the media, the world has been explaining why the Rio Olympics will fail, will they be ready, what will go wrong—anticipating a failure that this “third world country” couldn’t possibly host an international event. And while the Brazilian pundits and everyday citizens may make fun of corruption, crime and Zika—there is a national pride to the outside world.  (Okay—single person focus group…my husband never doubted that Brazil would be ready—even when it was reported that the water was unfit for swimming, he said the governor of Rio was just putting on a show to get federal funding—which came through the following week, just as Zika focus was transitioning to cases in other countries. Oh, and by the way, the economy is rebounding after the democratic impeachment of Dilma).

My heart broke when I first heard about the attack on the Olympic swimmers. (After expressing gratitude that no one was hurt) Oh no, I lamented, just when Brazil was doing so well in presenting its true glory, glamour to the world. There was also a moment of thinking “those f***ing thieves…what a shame on this global stage.

They played into and I was brushed by capturing the stereotype of crime in Brazil. How would anyone not believe me presumed Lochte…of course this could happen here. (Like the Charles Stuart murder in 1990 Boston—Black man robs white couple in Mission Hill as they leave childbirth class, killing wife and injuring husband. Whole city–okay, at least the white majority–lamented and mourned “it could have been me…” but it was the husband the whole time.).

Yes, but did Lochte really think that in Brazil he would only be judged by what people in the US would think? Did he really think he was Teflon as a Gold Medal Winning USA Athlete he could say anything and walk away?

Apparently yes.  Feels like another case of The Old Man and the Sea. For the Old Man, his tragic flaw was anthropocentrism—thinking that humans were the most powerful, the only and center of the Universe.

For Lochte it was his ethnocentrism—thinking that his culture, his values and standards are the norm by which others are judged.

Hardly the gold standard that one would hope for in a true Olympian.