FAMILY HISTORY WEBSITE IS AN EYEWITNESS DOCUMENTARY OF SOVIET UKRAINE 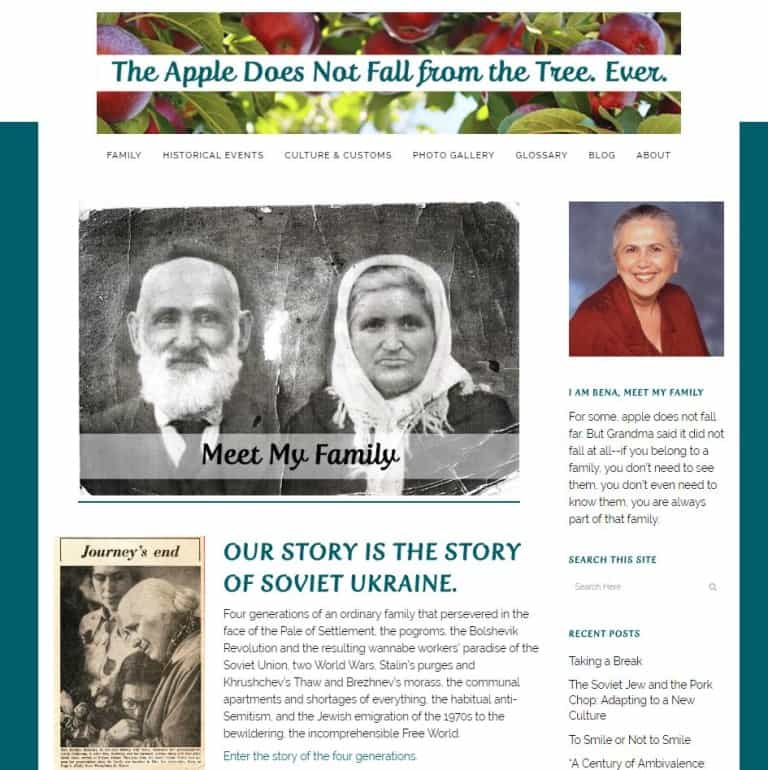 AppleDoesNotFall.com is a first-hand, primary resource for historians, students, academics, anthropologists, genealogists, or anyone with interest in Soviet culture, Soviet Jewish immigration, families with roots in that part of the world and in this period of history, culture clash, and the implications for relations with Russia today. The author, Bena Shklyanoy, presented about the site and blog, the result of 11 years of intensive research and recollections, at the International Conference on Jewish Genealogy, August 7-12 in Seattle Washington.

“My family story starts in 1852 in the Kiev region,” says Bena Shklyanoy, “It spans two world wars, the Bolshevik Revolution, annihilated shtetls, the Holocaust, the Soviet empire (rise and decline), and the 1970s large scale immigration of Soviet Jews to the U.S.,” says Shklyanoy. “First, I only wanted my children to know their roots. But as the research went deeper and deeper, I realized this was a window into the intricacies of Soviet reality that most are not aware of.”

…All day long, the janitor sorted the garbage brought in pails. She watched fragments of papers for duplicitous content, return addresses for ties with subversives or foreigners, and food leftovers for rarities consumed by families that could not afford them…
The site features the family story, an extensive collection of images containing pictures of family, views of shtetls and cities where Bena’s family lived, and the old documents and pictures of things and events that illustrated the story. A comprehensive glossary explains the people, places, ideology and artifacts that permeated her world.

Our new home in the U.S.

…The principal at my daughter’s new Jewish school called, outraged. “How could you send pork chops for lunch?” What did I know? “Jewish” was something stamped on a passport…

“There is History and there is history. The former — researched taught, focused on the world — creates our collective story organized by date and cataclysm,” says Shklyanoy. “The latter — private and timid — consists of memories, both told and unspoken, of families and individuals.”

The ongoing blog offers insights into Soviet culture and Soviet mindset and stories from Bena’s own experience, and invites others to share their stories as well.

“For some, apple does not fall far. But my Grandma said it did not fall at all. If you belong to a family, you don’t need to see them, you don’t even need to know them, you are always part of that family.”