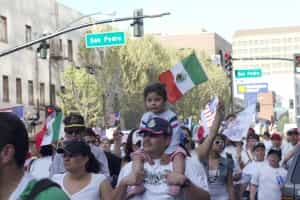 One of my clients wrote a book on grandparenting. He’s a grandparenting activist, volunteering to set up grandparent programs at secular and religious schools across Chicagoland. At 88 he has several thousand followers on Facebook and Twitter and is an active blogger. For grandparents day in September, he ran a first person story from a fellow grandparent talking about what she had learned from her grandma. She shared her grandma’s amazing strength and how that helped her family survive poverty and hardship to build a life in America.

“Like others before and after them, they came here for the opportunity to work and better their lives. This is not what many of the immigrants today come for. They come for the freebies bought with money STOLEN from taxpayers through taxation.”

My first response was “oh sh**”, first because no one was going to foster hate on a positive loving site and second I had to decide how to handle this for a client. I knew I couldn’t let it hang there because “silence equals complicity.” Deleting it wasn’t right because conversation and dialogue are at the heart of breaking down stereotypes (plus this client’s whole philosophy is about engaging in conversations about values) and then there was the decision as to whether to respond as the client, or as I ultimately did, as a comment from me personally– with third party endorsement…e.g. gather the facts and respond with documented data—this is not just a difference of opinion, but actually I am helping you with correct information, for example (the response):

“Studies have consistently shown that immigrants use social programs such as Medicaid and Supplemental Security Income at similar rates to native households.”

It being Columbus Day, and following the debate last night, it is critical to have information at your fingertips to counter biased remarks when people are talking about immigration. For me, my husband is an immigrant, both of my grandpas were immigrants, our country was built on the stories of immigrants (new DNA studies even show that Native Americans came from several different places from around the globe, including from “Australasia – a region comprising Australia, New Zealand, New Guinea.) The point is, we are all immigrants at one point in our family history.

Immigration statistics, facts, to counter stereotypes and generalizations thrown out in conversation…

Statements equating documented and undocumented immigrants into one group (often referred to as “illegals.”)

“As a report from the Institute on Taxation and Economic Policy (ITEP) points out, “the best evidence suggests that at least 50 percent of undocumented immigrant households currently file income tax returns using Individual Tax Identification Numbers (ITINs), and many who do not file income tax returns still have taxes deducted from their paychecks.” (Read the full article on the American Immigration Council website.)

We don’t know who is coming in


Here is an infographic from whitehouse.gov on the screening process for refugees.

Immigrants are taking jobs from US Citizens

Actually…I don’t get the argument, because US Citizens can be immigrants as well.) Either way, here is an article from The Atlantic arguing not only do they not take jobs, but overall are good for the economy.

And, for anyone saying that we don’t have any laws in place…read this. (Wait…the wall is already up?)

And, those saying to build a fence along the US/Mexico border? Um…we already have one. In fact it was Obama who in 2011 said the fence was basically complete.” According to Wikipedia (I know, not a valid source—but a sometimes helpful starting point to get background to verify elsewhere) Under “Secure Fence Act of 2006” it says By April 2009 Homeland Security had erected about 613 miles (985 km) of new pedestrian fencing and vehicle barriers along the southwest border from California to Texas.”