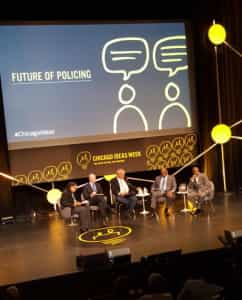 Agree, disagree, new ideas, new perspectives…that’s what happens when you get four really smart people with clearly articulated positions on a stage together with a brave moderator—a basic model of Chicago Ideas Week. I found myself saying “oh, yeah…he has a point” and “oh, right, I can see what he is saying too…” In politics that is called a flip-flopper. But in real life that makes you a listener, someone open to new ideas and perspectives (hmmm…sounds like an interculturalist). As Emerson says, “foolish consistency is the hobgoblin of a small mind.”

Shall I tell you the secret of the true scholar?

It is this: Every man I meet is my master
in some point, and in that I learn of him.

So in that vein, and in the order they were sitting, here is an idea or something new learned from each of the four speakers

Futterman seemed better at broad statements a la “we need to build trust,” but without tactical solutions, but perhaps that is his role as founder of the Civil Rights and Police Accountability Project. Just as O’Donnell cited all of the statistics supporting what Police have done right (e.g. crime reduction, etc.), Futterman had the list of all the times police had violated civil rights, what about the code of silence, etc.

He did provide an interesting “case study,” the Richmond, CA example, in response to community policing, building trust, and if/how strategy should vary based on the racial make-up of a community. The diverse Richmond/Oakland community had high crime. A new police chief comes in from the all-white Fargo, ND and says he will implement the same strategies as he did in Fargo…the result was crime down, trust up and no shootings for 10 years. (Jeez—if only I could write something without Googling for links to support it…the first link for Richmond CA police is this huge sex-scandal.)

At the core of the training we do at Executive Diversity Services, for corporations and Police Departments, we talk about how culture influences communication and conflict resolution style, and how understanding this, being able to recognize your own style and adapt to the style of the other person, can help to de-escalate situations.

While O’Donnell was armed with facts and statistics, he was the odd man out from the beginning. Sure, because of his opinions, but also his delivery– his direct communication style (the dominant/white style in the US)…you know, the “just the facts, mam” style. He held his briefcase on his lap as though he was ready to get up and leave at any moment, and stared straight ahead no matter who was speaking—appearing not to listen at all, and certainly not connecting with the people first, then sharing the data (an engaged style–typical of 55%-85% of Hispanics and African-Americans).

And, while his (if I understood correctly) assertion that there’s not a bias problem — “more whites are shot by police than blacks each year,” — he did raise valid points from a police perspective… “It’s a conflictive, adversarial job…how can the police make an arrest of a resisting person?” It is true that we (unless you are Marc Hill) look to the police to protect public safety. The question O’Neill raised, in its absence from his perspective, was, “but at what cost?”

Oh, and he didn’t win points by his opening assertion that the media had created the crisis in the first place because of what they chose to cover. However, (see below) he did end up with a closing question that made an important point about where, how, change can begin.

Dr. Alexander brought the most ‘street cred,’ as a Police Chief, as the National President of the National Organization of Black Law Enforcement Executives (NOBLE) and as a member of the President’s Task Force on 21st Century Policing. Or perhaps I felt he had the best perspective as someone who was experienced in law enforcement and who was connected at the top levels of leadership (including himself) of initiatives pushing for reform (I love the change from within model.)

And, indeed, at several points in the conversation he bridged the divide between O’Donnell and Hill, acknowledging the difficult line that police walk. “When there’s crime in community people call me…we need more police presence. Then a friend or family member is stopped or arrested for doing something wrong, and I’m getting calls that “there’s too much police in our community.”

Even coming from different perspectives everyone had a reason to relate and listen to what he was saying, and moderator Cheryl Corley was smart to ask him to intervene when things got hot. I loved when he said “Barak said…ahem, I mean the President of the United States said…”

I love people who have strong, albeit crazy (as in I couldn’t imagine it) philosophies of life, but who express them so logically, maintaining it’s just their opinion (e.g. not in a “holier than thou” way) and with solid facts and examples to back it up, that you find yourself saying, hmmm…I get it. Hill is a self-proclaimed “abolitionist,” envisioning a future with no police or prison. “If the system was fair, would I be OK with prison? I’m saying that if the system was fair, there would be no prison.”

He’s a good panelist as well, nimble and funny and looking out to engage the audience, not just his fellow panelists. Plus you can tell that he’s listening to what others are saying because he responds to where the conversation is going (as opposed to simply reiterating the same points he came in with.)

Oh, and as a marketer (that’s me), respect/good job on not missing a gratuitous chance to plug your new book!

While Cheryl is an accomplished reporter in her own right, I was interested in her role as the moderator, particularly because she opened the conversation with her own clear opinion…there is some sh*t happening in policing and we’re going to see what we can do about it.” I found it interesting because of the idea (mine?) that the moderator is supposed to be “neutral.” It actually was more interesting that she framed it from her perspective, but then gave fair questions, spread out across the panelists, and let them do the talking once the panel began.

Purely from a presentation/speaking perspective (and this feels like “duh” now that I’m writing it) but she was more effective by being emotionally invested in the topic, not just a professional/objective facilitator of the conversation. 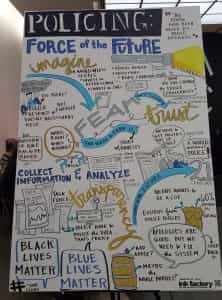 Healing and the Next Generation

It was very timely that the event took place on the same day that Terry Cunningham, the president of the International Association of Police Chiefs had apologized for “historical mistreatment” of minorities. So the conversation opened with valuing or not the apology, with responses ranging from “this is long overdue” to “it implies it’s in the past, but it’s not” to “where do we go from here now?”

Perhaps the most poignant moment was when audience member J.P. Kheperu, a B.A.M. (Becoming a Man) Counselor with Youth-Guidance at Harper High School in Chicago (who had brought a group of his students with him to the event), came to the mic to ask Eugene O’Donnell what he would do to rebuild trust between police and the African American community.

O’Donnell, who had been much maligned and disagreed with during the talk in the end supported one of his points, that if people want a police force that represents the community, people from the community have to apply to become police officers, citing a collapse of police recruiting and a mass exodus from the force in recent years.

“Let me turn it around and ask you something,” O’Donnell responded. “Would you become a police officer?”

The answer from Kheperu was “no,” but the point was well taken—that action for change has to happen from both inside and outside the system.