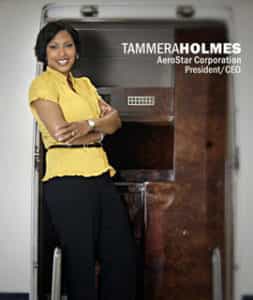 I’m off to speak at a school today as part of the Black Star Project Youth Motivation Program, which has me thinking about how triply impressed I am by Tammera Homes, and how sticking to a dream and mission over the long haul yields results.

I’m talking about something Tammera said 10 years ago when she was featured in a Dynamic Women in Aviation publication by the Chicago Department of Aviation, and today’s guest post by Carl West, below. You can see how her vision is becoming reality–and how she is personally taking action to make positive change in the world (and, again, if feeling pride when people you know succeed is ‘mom-ish,’ count me in!) 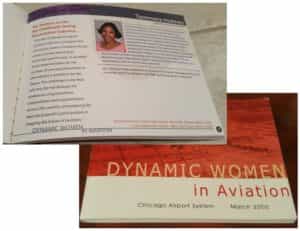 “One key challenge facing the aviation industry is to expose the numerous careers in aviation to our nation’s youth, focusing on minorities and females, in an effort to increase and diversify the number of young professionals in the industry’s workforce for the future. This challenge is one that will only be met through the endeavors of government, corporations and organizations across the country campaigning for their local youths’ participation in shaping the future of aviation.”

Here’s what Guest Blogger Carl West, TBTNewsService.com, is reporting in 2016:

Students in the nation’s third largest city are flying high toward bright futures thanks to the after-school AeroStars Aviation Exploration Apprenticeship Program. To learn more about the program that prepares students for careers in the aviation industry, be sure to attend the AeroStars Family Flight Night “Lights on Afterschool” rally from 4:30 to 6:30 p.m. Nov. 2 at Perspectives-IIT Math & Science Academy, 3663 S. Wabash Ave., Chicago.

Besides learning more about AeroStars and aviation, it’s a chance to celebrate a $50,000 award from the Boeing Company. The grant, Tammera Holmes said, will provide students from underserved communities the opportunity to participate in their groundbreaking programs.

Tammera Holmes of Aerostar to serve more than 400 youth with programs to inspire careers in aerospace and aviation.

The Country Club Hills resident, Holmes, President and CEO of AeroStar, will give a brief presentation on their STEM Aerospace apprenticeships and how they prepare students to fill job vacancies in the aviation industry. U.S. jobs are being filled through H-1B-Visa by international candidates; 7,000 being issued annually in aerospace alone. (U.S. Department of Labor) And according to the U. S. Government Accountability Office (GAO-14-374), in 2012 nearly half of the STEM 4-year Bachelors and advanced level Masters and PHD degrees were awarded to “non-resident alien students.”

“When we talk of needs in the aerospace industry, we are almost at a crisis mode being able to fill jobs with qualified candidates. This is happening so quickly. We need to position ourselves for funding not just for after school, but for programs that meet the needs for minorities, women and veterans,” she said. AeroStar anticipates serving more than 400 youth in grades kindergarten through 12 during the current school year.

Programs are offered to high school students through a partnership with After School Matters at the Air Force Academy High School, the Perspectives Charter School-IIT Math & Science Academy, the Urban Prep Charter School for Young Men (Bronzeville campus), and the Young Women’s Leadership Charter School in the summer.

Students learn about the history of aviation, notable contributions from locals, fly kites, drones and remote-control helicopters, get career planning, meet with aerospace professionals, and ride in a plane. Holmes is one of 15 Afterschool Ambassadors, chosen by the Afterschool Alliance, who work to ensure that all children and youth have access to quality afterschool programs.

Nationwide, she said, there are two children hoping to get into a program for each child enrolled. In Chicago, she added, the numbers are staggering. “Nine children in Chicago are waiting for every one child in a program. That’s unheard of,” she said. “We have a desperate need to turn things around and AeroStar is a large part of that.”