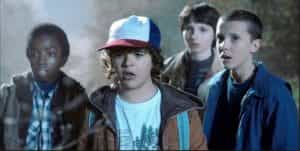 My son just came downstairs and told me that he needs to take risks and have an adventure.

He was inspired by the gang of four on Stranger Things. I found out about this Netflix series in the People Magazine that came in Friday’s mail, and now by Saturday night we’ve binge watched the entire first season (family bonding). Now L has already called a friend and they are planning. “First we actually have to have a group of friends,” they’ve decided.

And what that tells me about me (bad mommy—this is not about you, finish talking to your son) is that while he is craving risk, I’ve become risk averse. My son is continuing to talk and say things like “Teens crave risk.” Which makes me realize if anyone is going to take risks it should be the adults. Studies show that brains don’t fully develop until one’s 20’s—so science supports that teens take greater risks while also making bad choices. (Excuse me while I go lock my son in his room until he is 22.)

Taking risks—so my son wants to go in search of conflict, and I am afraid to write something that might offend someone. And, honestly, who said (someone did, right?) if you don’t offend at least someone, then did you even say anything? (Like the end joke in this piece by my satire writing teacher Caitlin Kunkel from The Second City, on “How to write a joke about Bill Cosby without offending anyone.”)

Lessons today…People before technology (e.g. if your teenage son wants to talk get off your computer and never choose your cell phone over your husband) and take risks. Including (or especially) with risks of expression.