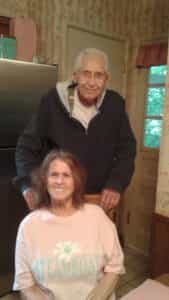 My dad died last May and every time there is a holiday or significant date it exacerbates, fuels or reawakens the grief and sense of loss. So far we’ve had my parents’ first wedding anniversary last June, the first Thanksgiving, the first new year… And now we have his first birthday since dying, coming up on January 17.

I have a friend Lee who once remarked, when talking about things that happen to his partner, a family member, friend or colleague, that he had to remind himself “this isn’t about me.” Although I in this case it kind of is about me, since I’ve lost my dad and it is about how I’m feeling and navigating the feelings of grief and loss.

But, as any interculturalist might instinctively seek out…there are other perspectives as well. For example:

After nearly 60 years of marriage, it will just be hard. But she’s very pragmatic and I imagine will allow the time to be home, to be alone, to think and to remember all of the great celebrations. And she will expect and relish a call from her daughters (including me).

A favorite for my dad was his 40th birthday surprise party. He drove me and my sisters out to the country to stay with Gertie and Julius, and an hour later Julius was back knocking at our front door—of course his first reaction was something had happened to his girls. As I sat at my dad’s desk the weekend I was home for his shiva, I found all of the cards and letters he had gotten that night in his desk drawer.

As much as our society gives elevated status to families of a loved one, my dad had a rare and amazing gift that he enjoyed the same group of friends since fourth grade—he and his best friend Norman were friends for over 80 years…as old codgers they still played jokes on each other, with Norman doing things like hiding dad’s cane for yucks.

All of his friends were with him in the awful care facility one afternoon, and even in his poor health he felt rich, ‘the guys’ laughing and joking, telling stories from across the decades.

Perhaps this day will be even the hardest for the friends…I suspect they may have known him best, getting to see him through all of his roles as husband, father, boss, man.

A therapist at one of my clients, The Juniper Center, wrote a blog post in December about managing grief and remembering loved ones during the holidays. While I viewed the post abstractly at the time—my role to edit and post it, I realize now the post speaks to me as well.

The mere process of writing has made me laugh, think of memories and develop a plan. So, with January 17th unavoidably (I hope) coming, here are six ideas to honor the birthday of someone who has passed.

“I ordered the wrong thing” happened enough that my mom considered putting it on his tombstone. But it’s also something that makes my son laugh every time, thinking of a dinner out with my dad a year before he passed—when he ordered the Shrimp in Onion Cream sauce at LuLu’s Seafood & Dim Sum in St. Louis. It started as it often did, with him saying “I should order something different, try something new,” a wonderful and inspiring idea at 84. It never seemed to work out in implementation. Out of 164 items on a Chinese Restaurant menu—not sure how he landed on Shrimp in Onion Cream Sauce—that doesn’t even sound like it would be good. But, for someone to age and continue to want to learn new things and grow—I’d eat that recipe any time.

“NuNu” meetings were outings with dad when we were little girls. I was “queen of the NuNu’s,” which was a special treat as the middle daughter who didn’t always get the lead title. And speaking of treats—that was key to a successful NuNu meeting: a hike at Rockwoods Reservation in Missouri followed by a big ice cream cone was a classic outing. He inspired my love for nature and the outdoors and, of course, ice cream! I can still remember my sister’s surprise when the “stick” she announced was a snake in an attempt to scare me actually ended up being a snake.

Even on his death bed, if you started talking about politics and what was happening with the “military industrial complex” or big business, politics and corruption or other such topics, my dad would get so riled you hardly knew he was sick. As previously mentioned, when we thought he still had a chance to recuperate at home I set up his blog so that he could warn the next generation to take action.  He never had the chance to fill it, but he knew so much and supported with facts and details, and was so wise. “The price of democracy is eternal vigilance” was oft quoted by him. For me it’s “silence equals complicity.”

Given my love of intercultural traditions, I have to look at how others around the globe honor their dead. As with my approach to my own Judaism, I look at the actual celebrations or customs as ‘suggestions’ to create my own. With big meals and food offerings in many, perhaps going out for his favorite “sneak” meal (the one prohibited by his wife and apparently as I only found out recently eaten when out with my husband and son) would be a way to honor him. It will certainly make me smile, knowing he had a sense of humor, and a natural gift for connecting to others and building special bonds.