Can anyone help a blind man cross the street? 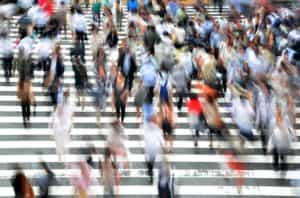 If you were expecting this to be some sort of metaphor for finding the meaning of life, or one of those ‘let me be grateful because of what other people suffer” tomes, you will be disappointed. I mean the question literally.

It happened a number of years ago when I was riding my bike down North Avenue and a man with a bucket and a fishing pole shouted, “Can anyone help a blind man cross the road? It was a big intersection, the light was red, cars had stopped, and he was, indeed, literally a blind man trying to cross the road.

I felt like I was on candid camera. Is that a trick question? Who wouldn’t stop to do that? I set my bike down and helped him across the street. Of course I had thoughts like “Maybe it’s a trick. While I’m helping him someone else will steal my bike. Or he’ll grab my arm and throw me in a van.” But he really was just a person needing help from a stranger, and then I was on my way.

I thought of it again after an experience I had at lunch last week.

In this case I had to bring all of my intercultural skills to bear: Assume positive intent; control your knee-jerk reaction.

It happened as I was ordering my soup at the coffee shop. The young woman behind the counter could not have appeared more bored. Her head was resting on her hand, atop her elbow resting on the counter. She could barely keep her head up.

All I could think was, her manager or corporate headquarters would be horrified that she was treating a customer this way. The knee jerk/bias/stereotype thought—these $%#$#$ young people. No respect for customer service.

Instead, ‘assuming positive intent,’ I asked: “How are you doing? Are you feeling okay?”

“I’m sick,” she said. “Did you notice?” she said sweetly and with sincerity.

“Holy f****** s*** she is going to touch my food and now I’m going to die of the plague,” I thought with the utmost compassion. What I said instead was “Don’t you think maybe you should go home?” People probably don’t want to eat your germ infested…I mean wait, no, “I’m sorry you’re sick but people might be concerned about getting sick as well.”

“Doesn’t your manager realize that it’s probably not a good reflection on the business?” I asked.

“Do you want to talk to my manager?” she responded.

No, actually, I want my lunch and I want it not to be bacteria ridden, I thought. But then I realized she was asking me a question that evolved from the caring concern I had initiated. Shoot, what now?

I didn’t want to talk to the manager, but she had asked. So now all of a sudden I feel like this young girl’s mom or protector… poor thing needs my help, which I’ve implied is available by getting involved.

“Will it help you if I talk to your manager?” I asked.

The manager came up and I explained that I really liked this restaurant, that I understood he had to run his business, but that maybe it wasn’t a great idea to have someone sick at the register. I didn’t even get through liking the restaurant because as soon as he came up and I opened my mouth, he said “she’s going home in a few minutes.”

Nobody called anyone any names. Nobody yelled. She needed help. I was able to help her.

What would love do?

There are so many reasons we don’t say things or get involved. It’s not our business. We also make our point and continue to be angry. We don’t see things from the other’s perspective.

Honestly, I was shaking when I sat down with my soup (hope there was no spit in it). We don’t want to get involved, or we dig in our heels and take positions.

I could have said to the manager when he showed up “what the f***? Are you trying to give the plague to the entire community? And what kind of taskmaster are you making this poor young girl work when she’s on her deathbed?”

But I didn’t. I said “I like your restaurant” and suggested that maybe having someone sick at the counter might turn off the customers. When the young woman initially seemed rude, I looked deeper, asked if she was ill.

In the coming days, the ability to have and show compassion, engage in civil public discourse, will be critical.

God knows I’ve gotten it wrong, too. Years ago I was at another coffee shop, packing up to dash out for a nearby meeting. “Can you help me with something?” a woman asked. Without looking or asking I assumed she wanted me to watch her stuff while she went to the bathroom. I was late, I was very important, nope, can’t help.

Turned out all she wanted me to do was call her cell phone to see if it rang (20 seconds to do that?) She had cancer, was waiting for a call from her doctor, and was afraid she had left her phone in her car.

What would love do? Love would acknowledge the other person and do what was right, what was kind. We think we are powerless, but often we are all that is needed in the moment.