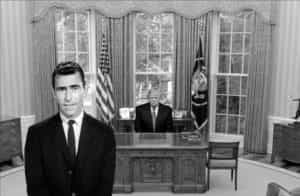 I sit stroking the hair of my two year old granddaughter Katia. She was born when personal choice was banned and family planning was defunded at the same time, coincidentally coinciding with my son’s ‘coming of age’.

I sob as I read the form letter just received from the government, telling me that my son has been killed in action, having been sent to El F***istan when the draft was reinstated after Trump’s decrees and policies erupted in World War III.

I look lovingly through my tears into my granddaughter’s eyes as she says her first word…”kike,” apparently learned from her teachers at preschool who have nicknamed her that, now that political correctness is out and hate is in.

What was the question? Why did you go to the Women’s March?

I’m sorry…what was the question? Ohhhhh…Why did you participate in the Women’s March last month? The vision above was not what was in my head on January 21st.

In fact, at the time, I probably walked because all the cool girls were doing it and my mom called me and told me to do it. I walked because I am a woman. I didn’t like how Trump talked about women during the election.  We are more than 50% of the population. So I walked. 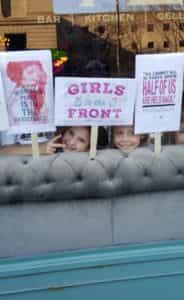 If I pretended I was writing this at 7 pm on January 21st, I would tell you the day was ah-MAZE-ing. “Tell me what democracy looks like” a young woman shouted, her voice long gone and now buoyed only by her passion. “This is what democracy looks like” we shouted back. There were women and families and children and men and all ages, people on crutches and in wheel chairs. We criss-crossed downtown Chicago connecting with new throngs of people as we turned corners, walks spontaneously erupting from different points in the City.

I felt like a bionic superwoman that day… I taught three aerobics classes (including covering two for a sick colleague—you know, to support women literally and not just figuratively). Then I hopped the train downtown arriving as the walk kicked-off. 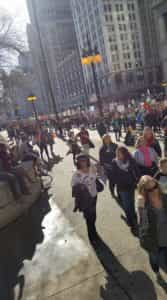 “Without me there would be only 174,999” I thought as I eased into the crowd, reminding myself why I was there.

After an hour and a half I connected with friends, a group of ah-MAZE-ing women, over lunch and a martini at the Russian Tea Room. The place was full of women, signs tucked under tables, a sisterhood and camaraderie filling the air.

We felt empowered and full of purpose.

Waking up on Sunday, the question still nagged. Wait…why was I there?

I teach a workshop on Marketing as a Second Language to help non-marketers develop their elevator pitch. In this context Radio Station WIFM means no one listens to what you are saying until they decide if/how it affects them personally. In a management course on change management, the instructor said a person’s reaction to change boils down to fear about how it will affect them. WIFM

So what’s my WIFM? Three weeks later I acknowledge that I fear Trump is going to cause WWIII and reinstate the draft and I have a 16 year old son. Why march? I’m a mom. Trump’s policies will kill my son, leaving behind a 17 year old mother and the aforementioned fatherless child caused by the irresponsible position of abolishing choice and family planning at the same time.

What now? Form an opinion and take action

You would not think it would be so hard to form an opinion. Especially in a time when people spew them as mindlessly as eating a supersize bag of potato chips. And yet there I stood at my frontal lobe, looking down an Alice in Wonderland long hallway with dozens of closed doors to choose from, all closed. 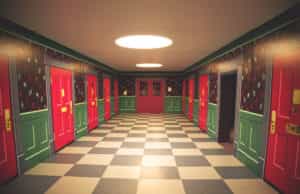 My little WIFM fear story just dictated my next steps: send a donation to Planned Parenthood and start a mind  map to help me understand what is happening where in the world, what the US is doing, and how that is impacting the world.

I’ll also continue to call my government reps…Senators Dick Durbin and Tammy Duckworth and Congressman Jan Schakowsky (and make a donation to Jan—she is about the business). I’ve called each more in the last 10 days than in the last 10 years combined, but it’s exhausting.

While I was on the phone with them contesting an anti-Semite from joining the National Security Council, someone with a racist history was approved as Attorney General. While I’m at a meeting to support our local public school, the unqualified education lady got approved.

It’s time to pick which door to open first. And women are doing it. One friend wondered if everyone at the walk was registered to vote—she is taking on voter registration and removing barriers. Another was already active in Personal Pac and other social justice initiatives. She is already connected and upping her game. Still another is speaking out about Immigration issues.

Change is happening so fast, it’s hard to keep up. It feels like the broken tennis ball serving machine bombarding a seemingly ready player.

But even with that image, if you focus on the machine, a pattern will emerge, the timing, the trajectory. Perhaps seeing that pattern is the first door to developing a strategy to fight back.