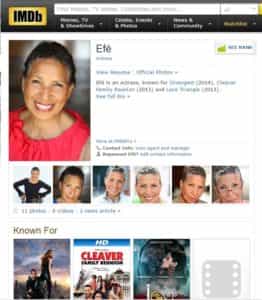 “I call this my Cinderella story,” says Efé McWorter, 69, referring to the time she picked up and drove herself across the country to move to California 10 years ago. While “going to LA to become a movie star” was not her original plan, McWorter, known only as Efé on IMDb, now has 25 credits to her name, and that doesn’t count plays and print ads!

“I came out here to help with my grandsons,” says Efé, at the urging of her daughter, Mei-Ling, who had recently separated from her husband. Grandson Donis was interested in acting and was going on auditions. With Mei-Ling working, she needed someone to take him. “At the time I really didn’t have a plan,” said Efé.

In fact, Efé thought she could get a position in arts administration (she was a retired school teacher, a professional dancer and had left a position in Arts Administration with the Chicago Park District to make the move) so that her daughter could stop work to care for the boys. “I got very close on two arts administrative kinds of things but it didn’t work out. Then my mom got sick, so I transitioned for her to join us in LA.”

At that point, then nine year old Donis’ career was taking off (he just wrapped up seven years playing Roscoe Kaan on Showtime’s House of Lies) “When I took Donis out to auditions people would ask me if I was in the business. I told them no. I’d been a concert dancer and taught in public school, so performing wasn’t a problem, but I’d never done theater.

“My daughter said why not try it? I was remembering ‘back-in-the-day’ when you had to have an agent to go anywhere. But Mei-Ling said not to worry…it’s all on line now.” With that, Efé registered on three different sites: LACasting.com, actorsaccess.com and castingfrontier.com, sites where you pay a fee and post your profile. Headshots? She stepped into the living room and had her daughter snap one. “I had to give myself an age range—I can pass for 45-75. And I started getting emails for anything that came up for a woman, African-American, in that age range. It was fun!”

Initially Efé was just learning and having fun, including roles in student films at the nearby university, to get experience. Two years later she was advised she needed a “reel” showing her in action. She showed it to grandson Donis’ agent, who said WOW! In 2013 she became a SAG (union) actor, and things continued to grow.

“I just did a print thing the other day for Bank of America. So I’m still having these new experiences. I’ve done three plays, including a dance play last fall,” which drew on her training as a dancer. “It’s not a huge money-maker,” Efé confides, after the agency, the manager and Uncle Sam get their cut, but it’s fun. “It’s my knitting,” she says. “I want to go out and audition. I get to meet people. I get to go places where I haven’t gone before.”

“The pools for the grandma are small. A single call can get 2,000 submissions and they bring in 30 people. So it’s competitive. But they always need older people. I’m grandma at this point, or sometimes the mother,” says Efé. “More and more it’s not just the size 0 or pretty person. And with the emphasis on diversity and representing real people, there are more opportunities to work.”

Efé, who turns 70 on May 28, says “it’s been wonderful. I advocate for everyone to do this. Get on one of these sites and just push the button. If you push the button for 10 jobs…someone is going to call you in.” Efé also likes that it keeps her on her toes. If you audition and get the part one day, for plays, you are expected to be familiar with the lines if not ‘off book’ by the next day.

Efé had not originally planned to retire at 59 but responded to her life and family’s needs. With pensions from both the Chicago Board of Education and the Chicago Park District she adapted…and became successful. “I didn’t have any concerns about picking up and moving,” said Efé, when her daughter needed her, “but everyone else did.”

It reminded her of the lines she had read at an audition earlier in the day, when the other character asked her “were you scared?”

“No, but I should have been,” her character answered.

How do you/do you see your age as an advantage to what you’re doing now?

At auditions Efé may be up against people who have been in the business since their 20’s. “It’s not age that makes a difference,” she says. “It’s experience,” acknowledging when she started there were a lot of things she was “scared to death about.” Now it’s just “business as usual. I lost my spot at an audition this morning. But now I know you don’t ask to start over. You breath for a minute and then find it and keep going. That’s what experience teaches you.”

“I think your age helps you say it’s one day at a time. If I don’t get this one I’ll get the next one. Sure, I get thrown a lot of lemons, but I do pretty good with lemonade.  I think that’s what age does. As a senior I want to feel like I have the wisdom. If someone asks my opinion I want to give something solid.”

Young or old, says Efé, “it’s about networking. It’s finding ‘your people.’ You work with this group or that group” (citing finding her yoga group, when she started practicing five years ago, as an example). “At some point it will feel right, and that’s when you will exhale.” About age? “Older people cannot get intimidated by younger people. We all have something to contribute.”

How do you/do you use digital media to build your dream and/or promote yourself.

As far as new technology goes, Efé says “I am enjoying this day and age and time,” but she does not “do social media; I think it’s a privacy thing. If something needs to get to me I’ll get it.” That said, Efé used computers in her professional life and relies on online platforms and connections to get auditions. She maintains profiles on movie hiring sites including photos and her reel, and has a profile on IMDb. “The computer is freaking phenomenal,” says Efé. “You can find anything!” she says. “Stop and take a beat and see what you find interesting.” That’s a good place to start.

Efé continues to search out ways to learn more. Most recently, she took a class to learn how to do voiceovers.

Oh, and the character from her audition who should have been scared? She got the part.