The set-up was a trip to visit family in Brazil: me, Geno and our then 9 year old son, Lucca. Everyone (including my husband) had to work during the week. Except for my 19 year old niece/goddaughter Priscila, who was between school/work/growing-up/deciding what to do.

There was much discussion and worry among Pri’s mom, my husband (Pri’s uncle/godfather) and another 5 or 6 sisters/brothers/cousins/in-laws/aunts about Lucca and me spending our vacation inside the house vs the risk of sending the three of us into the big, scary city…alone.

Everyone, from her mom and brother to my husband and the rest of the family was worried about us. Everyone had warnings about don’t do this, don’t go here, be careful, etc. But then everyone had to get to work. So it was decided: Pri would take Lucca and me sightseeing.

It started with our discussion of the best way to get downtown—which train station would be the best for parking? If we parked at the mall station, it was only eight reais, but the train might be crowded (and in Brazil they do squishy crowded–I was worried about Lucca). “There’s parking near stations a little closer to downtown. I guess they cost the same,” reasoned Priscila. For Chicago that’s like assuming that parking at Cumberland ($6) will be the same as parking at Clark & Lake ($36). Well, I know that now.

Why haven’t I written this blog post before? For me it was embarrassment that I wasn’t this competent, confident big city woman. Instead of acknowledging that for myself, I projected it as embarrassment for my niece that at 19 she wasn’t this competent, confident big city woman. But really what was at play were unspoken, unconscious assumptions around who was in charge, given the complex interplay of age, relationship, nationality, language, role and experience and which one trumps which.

Me: I am from the US. Portuguese isn’t my native language. I have my 9 year old son to protect. Thankfully Priscila is a 19 year old adult from Brazil who will know how to get around and what to do.

Priscila: I am a child and would never go to downtown in a city of 12 million people by myself.  Thankfully it’s okay because my adult aunt/tia/godmother is here to protect me. She’ll know how to get around and what to do.

But once I understood I was the adult in charge, I took a deep breath and said. “We have to park and get out of the car or we will never find our way anywhere.”

What next? If you are Jewish or age 9, when in doubt, you eat. And you can never go wrong in Sao Paulo. Many restaurants are “por quilo.” You fill your plate with every kind of vegetable imaginable, rice, beans, mandioca, farofa, beef, chicken, mini pastels and coxinha and pay by weight (of the food–not you). So delicious, and a chance to relax and regroup. Not to mention that if we all got hungry and/or had to go to the bathroom at the same time, that might throw us over the edge of positive thinking. 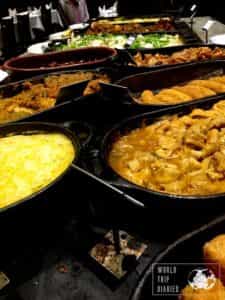 Plus it was a chance to establish (at least for me) that I was a good aunt, a good mom, a good godmother, calmly and confidently in charge. “Enjoy. Are you sure you don’t want more? Have some dessert.” I paid for lunch (I’m an adult, I can do this) and we left, finding ourselves at the base of the Edifcio Italia (the tallest building in Sao Paulo). We took the elevator to the top for a view. Ahh…there’s the Edificio Banespa, our original intended destination. “We’ll just head in that general direction when we’re back on street level.”

As they herded us back to the elevator, a suddenly mischievous Pri pulled us off to the side. “The restaurant’s closed,” shouted the attendant after us. “We just want to see it for later,” responded Priscila, boldly leading us to spy into half-prepared ballrooms, and around to the entrance to the restaurant. “It’s her wedding anniversary (true)” Pri explained to the host barring our entrance. “She’s thinking of coming back tonight with her husband (not true.) But that was a beautiful view! 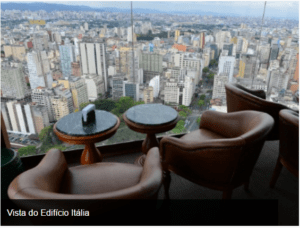 We wandered the streets in the general direction of Edificio Banespa. As the second tallest building you can see it at a distance, but lose site when you are up close. We asked a policeman for directions. He told us we were way off; that we had to take a train back to Praça da República and walk from there.

We did, only to find that we (as in the policeman, too) had been standing only two doors down from our destination when we asked for directions. Nevertheless, we followed his directions and then had to follow more directions back to where we were in the first place. We waved at said policeman when we passed by again, wondering how he had found his way to work that morning.

(Here’s our view from the top of the building).

Safely back home from our adventures we assured all that it was a great day.

Technology is only  as good as the people who know how to operate it.

After many attempts by all, including Lucca, we get the GPS going and follow the directions, last minute turns and all (a la Drake and Josh). Go Left; take the next right; turn right, make a quick left… As the streets get smaller and narrower we think, this can’t be right and pull over to look, only to discover the GPS is in simulation mode. The order of left/rights was correct. Their proximity to one another was not.

We look up to see an old (old as in ten years older than you at any stage of life) street cleaner in his orange jumpsuit leaning on the handle of his broom, gazing in our passenger side window. Pri rolls it down and leans over me to ask directions. He begins speaking quickly, using lots of hand gestures. By the 5th or 6th direction we giggle and drive away, knowing neither of us has any idea what he is saying, he continuing his directions to us a half-a-block away, in the rear view mirror.

By week’s end we were pros—going off the tourist mainstays to finding a family friendly event at the Instituto Butantan. After the now usual driving shenanigans we arrive late. “The event is full,” the sponsor tells us. “Can we just watch from the perimiter?” I ask, promising if they let us into the tent that we will just sit on the sidelines. That, really, I won’t allow my son to join the other children on the floor for the program about spiders.

Yeah..about that. Not only did he join them, there’s a clip of me being interviewed somewhere on public television in Brazil, sharing my thoughts on spiders, in Portuguese. “Tenho medo de aranhas. Mas agora eu sei que as aranhas são nossas amigas.” (I’m afraid of spiders. But know I know that spiders are our friends.”)

Another reason for me and Pri to giggle uncontrollably.

“Everything was perfect,” we report to all as we arrive home safely at the end of the day.

Here we are driving home.