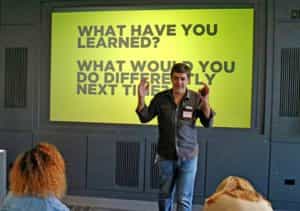 Clearly someone who creates a “change leadership school” is not going to be intimidated by a little change. For Gustavo Razzetti, 50, change is actually “an addiction”—something that continually drives him forward.

“Change happens,” says Razzetti. “Most often change happens from the outside. We cannot control our environment. At Liberationist we teach teams and individuals how to change from the inside out, to thrive in the face of new opportunities and disruptions.”

Liberationist is the newest company Razzetti founded just three weeks ago. “People can be change leaders and make change regardless of position,” says Razzetti. And the skills of change apply in both business and personal arenas. “There is change in every matter of life. A new boss. New teams coming together. A change in relationship. The more adaptive people are to change the more it can be a source to bring out the best in you.”

Even teams or people that are successful can get stuck. “We constantly need to reframe and rewrite,” says Razzetti. Technology, economy, the world, all continue to grow and evolve. “What’s worked in the past most probably won’t work in the future.”

On Change and Success in your Fifties

“For me, innovation is a mindset. Either you change or something will force change,” says Razzetti, noting it’s more fun to reinvent oneself, as he has done throughout his career, with no plans to stop now that he is “post-50.”

“Some think as you get older you want to play it safer. I don’t agree with that.” How can you be safe if you don’t create your own path he questions? “Age is a factor but more it’s an excuse—if you try to find a limitation you will.

Razzetti left a prominent leadership position at as the head of Lapiz. Originally created as the Hispanic target market arm of Leo Burnett, as the world changed, markets became more multicultural, Lapiz also evolved, including under Razzetti’s leadership, to be more about innovation and taking an outsider’s lens to creating solutions for clients. Razzetti is encouraged by data from a Kauffman Foundation study that showed that entrepreneurs age 55+ are more likely than their younger counterparts to leave a permanent position because of trends they see in the market.

“More experience makes richer entrepreneur experience,” says Razzetti. “The more you experience of life, the more diverse people you interact with, the more it makes you richer. “If you run five or six companies in your life it’s about knowing how to run a company.” It’s not a stretch experience he adds, noting that Liberationist may be the 7th company he’s run, plus or minus…

Trying to find a single life experience that set him on the path to of a change maker, Razzetti said people do ask, but it would be hard to try to find one event that is life changing. It’s more about the little events—learning self-care and how to cook out of necessity (which he now loves as a hobby) when he was a child, or that time when he was 30 and thought he might die overnight, lost in the woods in Patagonia (listen to the full interview for these stories).

“Life is a process of stopping, thinking, finding a solution.”

We all have fears, just as we all have change. How you react to it rather than fear it, and ow you those into energies into action, that’s what we teach in our school,” says Razzetti. And how he lives his own life. “We teach people to overcome their own limitations and stretch your mind, stretch your world.”

“Today 50 is the new 30,” he thinks about being in the prime of his professional life.

“We were sold a model to work until we retire. I don’t want to retire from life.”

As for embracing new technology, it was his sense of where technology was going before it actually went that inspired his first venture in the early to mid ‘00s. He saw early technology and building a digital presence as a way to bring people together. (Hard to remember when this was an “if” not “how” question.) “I saw that technology would bring people together—build community, across social media, to exchange ideas, sharing a code, sharing a solution.” Working for an agency in Latin America at the time, he decided to “go for it,” telling his wife “once you cross a line there’s no point in looking back…the decision is done. I look to the future.”

But, adds Razzetti from a current perspective, “Sharing on the web will not make life better. It’s about not-deviating from purpose and helping others unleash their own power to change.”