Life is an Adventure for Jerry Witkovsky 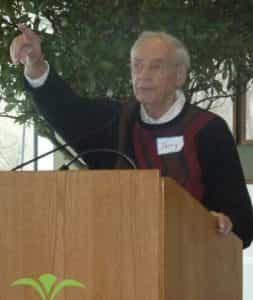 This past March, one week before his 89th birthday, author and grandparenting activist Jerry Witkovsky was honored with Jerry Witkovsky Day in the Village of Deerfield. (Read about it here in the Chicago Tribune/Deerfield Review). This is the same Jerry Witkovsky who self-published a book in 2013, has over 1200 followers on Facebook and Twitter each and has his own YouTube Channel. He’s also a regular contributor to Grand Magazine, including articles like this one on how to ‘negotiate’ when your grandchild says their “too busy to call.”

Just yesterday he started work on setting up a “Grandparent Connection” program at his 11th area school. Over 300 grandparents and grandchildren attended the last Grandparents Day at Deerfield High School. Caruso Middle School started a program in 2015, thanks to Jerry. Shepard Middle School, also in Deerfield, will launch this fall.

Grandparents have the power to transform their family

“I am passionate about the power of grandparents, when they unleash their creativity, to transform their families. They have so many skills from business and life and so many stories to share,” says Witkovsky. “When a grandparent dies the doors to the library are closed forever.” That’s why he pushes for ways for grandparents to enter their grandchild’s world, through school, through technology, through ideas and tactics to spark meaningful communication and connection across the generations.

Who is Jerry Witkovsky?

A social worker by training, Jerry Witkovsky has been a beloved mentor to thousands of individuals and generations of families, thanks to forty-seven years of professional leadership. That included 18 years as General Director of Chicago’s Jewish Community Centers.

In 1995, Jerry was named one of the city’s “Most Effective Nonprofit CEOs” by Crain’s Chicago Business magazine. Since retiring in 1997, Jerry has focused his considerable energies on being a grandparenting “activist.” He sets up programs at area schools and has been featured on radio, TV and in the news. ​His joyful commitment to his six grandchildren (ages fifteen to thirty-five), one great grandchild, and to their parents, and his passionate belief in the transformative power of becoming a “Teaching-and-Learning” family, is at the heart of his book The Grandest Love: Inspiring the Grandparent-Grandchild Connection, that he self-published in 2013.

Jerry captured his process to create programs in schools in an easy to use Grandparent Connection School Kit (available on Amazon). He is now turning the top-line booklet into a curriculum that will support schools’ ability to engage with grandparents. “Many grandparents already pay for their grandchildren’s education. This is a way for them to feel closer to their grandchildren and to the school for more fundraising opportunities.” Witkovsky presented a “how to” overview to the Lake County Counselors Association annual conference this spring, and is available to meet with you, too.

The new grandparent curriculum helps schools create a program and offers ongoing Grandparent Education Workshops. The five workshop series includes: “How to Enter Your Grandchild’s World,” “Building a Bridge with Storytelling,” “Teaching Values and Leaving a Living Legacy,” and “Intergenerational Empathy.” Some of the workshops are for grandparents only and some for grandparents and grandchildren together. A final “graduation” (for Grandparents) celebration is for all three generations, including parents.

Jerry reached out when he needed help to grow and connect online. (And, for full disclosure, he reached out to me and Intercultural Talk, for digital, intercultural-intergenerational-and real world marketing. He has a solid online presence and strategy that has connected him to grandparent bloggers across the country. He has spoken on this topic from coast to coast, and has done extensive research to document the fact that grandparents connecting to their grandchildren via the platform of the schools makes families and communities stronger.

Aging with Passion and Purpose

Married only six months after they met, Jerry and his wife Margaret enjoyed and long and loving marriage. In 1997 Margaret was diagnosed with breast cancer, and in 2003 she passed away. “I wallowed in loneliness for a long time after Margaret’s death. I figured I could just wallow or I could do something about this. I decided to join a support group for spouses who had lost their spouses to cancer. We met for fourteen months, one night a week.”

It was through this time that Witkovsky wrote and published his book, The Grandest Love: Inspiring the Grandparent-Grandchild Connection. Now, one year shy of 90, he continues to travel across the U.S. speaking to grandparents about how to enter their grandchild’s world.

“Some look at life as an arc, where you are young and learning in the beginning, achieving and producing in the middle, and winding down or even diminishing toward the end. But I say life is an adventure, from start to finish.”

Contact Intercultural Talk to find out how we can help you create an online and real world presence,or to learn more about the Grandparent Connection.