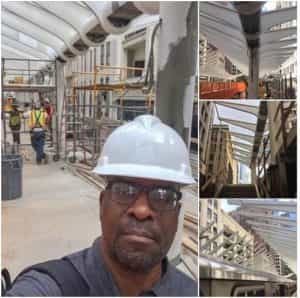 Lee Bey’s Facebook musings are a mix of City sights and sounds:

Add in some political commentary and family photos and you get a picture of someone who is multi-faceted and embraces every part of it.

When asked how he approaches “curating” (my word) his persona on Facebook, Bey says, for the camera, “It was all very carefully planned.” Really it was about doing what he likes to do and sharing things he is interested in. That same philosophy is leading him into a successful career as an entrepreneur, post-50.

“One of the advantages of being old is that you know the landscape, you know the players and you have the connections,” says Bey. “Often times age is seen as a disadvantage. My dad passed at 52, almost the age that I am now. I remember when his AARP card came and we were laughing at him. And then mine came, and I thought ‘it’s free food at Denny’s on a Wednesday!’ 50 is different for us than it was a generation ago.”

Bey said the shock of turning 50 lasted about a month.  “Then I thought okay, I’m still alive. I’m still in relatively good health. I see this. I can do this. So let me just do it. At 40 I never would have been as confident to do this as I am now,” he says, of launching his own business.

He also brings years of projects and relationships. “One thing about having a good early run is that you’ve done a lot of things.” For years he had taken assignments with architectural firms here and there, not as a cohesive career plan but attached to his interests. He knew he wanted to stay tied to architecture, so architectural photography became a way for him to do that.

Lee Bey is not a trained photographer. In fact, he didn’t even own a camera until he was 35.

“I found a camera in a resale store on Lincoln Ave. A 1956-57 Argus viewfinder camera. It was in a display case. And I swear it spoke to me. I thought ‘Lee is going batty, going crazy.’ It kept saying ‘come get me, come buy me.’ So I bought it.”

His ‘formal’ training was in journalism. The rest he came by somewhere between indoctrination by fire and necessity is the mother of invention. “Once you get a beat you have to learn it,” he says about getting assigned as the architecture critic at the Sun times, in the 1990’s.  That led to being selected as Deputy Chief of Staff for Planning and Design for Chicago Mayor Richard M. Daley in 2001. That’s where he learned photography. “Working for the City, I always needed to document projects. Rather than going through the long requisition process [to get a City photographer assigned], it was easier to do it myself.” (As a fellow former City employee, that is both hilarious and so plausible!) 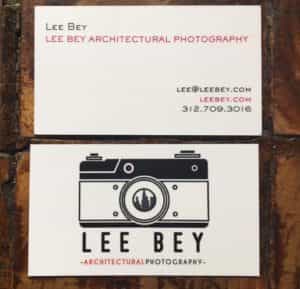 Bey left the City in 2004. From there he headed up Governmental Affairs for one of the world’s largest architectural firms, Skidmore, Owings & Merrill. He then took over as Executive Director of the Chicago Central Area Committee, and in 2013 left to work in Special Projects for the University of Chicago. (See his bio here.)

He left the University in 2015, the same year he turned 50. “I knew I wanted to do something different, but I felt like I was always the bridesmaid, never the bride.” And, Bey admitted, there was a fear factor brewing, that people would say “50 year old man? Nobody wants to hire you. You’re too expensive. You’re too this. You’re too that.” At the suggestion of a friend and with the accumulation of knowledge and ability from 25 to 30 years of being tied to one job or another, “I knew it was time to strike out on my own. And that’s what absolutely terrified me.”

While many a business adviser might advise a “pick one” approach as in ‘what’s the one thing you do best?,’ Bey did a personal inventory and decided “to do all the things I like to do. I write, I photograph, I know architecture and I can talk about it.” His idea was to do them all. “Like a buffet. And that’s my career.” It’s one part architectural photography. It’s one part urban planning consulting. It’s another part lecturing and talking about urban planning and Chicago City issues. And he now teaches a class at The School of the Art Institute.

“For me and for others, sometimes we think there’s the ONE thing we should do. But I’m purposely doing all three and have them feed on each other.”

On New and Digital Media 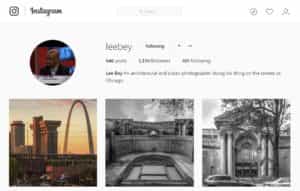 Google “Lee Bey” and you will get 666,000 results. The first five pages of which are all “this” Lee Bey. And the subjects are across the board, from architecture to Lee Bey’s Soul Closet a blog about African American pop culture (that he ran from 2007-2012.) “You would think that as a consultant that my media presence should be that…architecture,” says Bey. “It’s a little of that. It’s a peak into what I’m doing or thinking on any given day. It’s a weird thing. People feel they know me better through that (Facebook), and work comes to me that way. There’s something about being familiar with a person that helps this whole thing I’m doing. I wish I was smart enough to have planned it, but l’ll just manage it.” 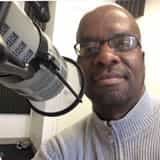 Bey has a website as an anchor for his business, and he is active on Twitter, Facebook, Instagram and LinkedIn. And it doesn’t hurt that he is often tapped as a commentator on radio and TV. “The TV stuff is always free but it helps the brand and you’re able to leverage that in different ways.” Bey thought it might lead to more consulting because of his expertise. “But it actually helped me get a photography client because a guy had seen me on television and knew who I was.”

While Bey likens his digital presence to “managing chaos, in a way,” he acknowledges that it is worthwhile, even if there is not a direct correlation. (Although he is a little more strategic on LinkedIn, where he can connect to architectural firms.) “Just the idea of being out there, having this presence that people know and actually are familiar with and respond to, it’s been a good thing.”

What’s Next for Lee Bey?

“I want to keep them all. I don’t want to give anything away,” says Bey, about his “buffet” career with portions of photography, writing and talking about architecture and urban planning. Bey sees himself now as starting off “modestly” in Chicago. “In five years I’d like to see an enhanced version, perhaps writing for a variety of places. I’d like to be doing it nationally and internationally.”

He’s also shot some things he’s never shown before, including buildings he says no one has seen before unless the live on the South side. “People don’t know and will be surprised at the quality of the architecture. When you get out of the loop it’s really the finest collection of buildings and open spaces that the City has to offer,” says Bey. “The news gives you abandoned lot after abandoned lot after abandoned lot. But there’s also this other part,” he says.  It answers the question “Why do people live there?” When people see the buildings in the neighborhoods he has captured, they will say “Oh, this is beautiful. This is fantastic. This is what a well-kept community should look like. And that’s the glue that holds it together.”

As he looks to that future, Bey only sees the world expanding, and that’s a benefit of embracing your full self as you age.

“When I was a kid, I was big football fan, and there was a big buy, Alan Page. He played until he was 36. When he was young he was this raw, fast, smart player. And then he got older. He couldn’t run with the guys. He was 10-12-13 years older than the other players. But he was able to use his mind. He was almost predictive as to where the ball was going. He didn’t have to run as fast or hard. He would be just there when the ball got there. That’s the power of using all of your experience. You’re able to use it, to extend yourself into this wonderful new career.”

Follow this One Easy Rule to Avoid a Midlife Crisis
April 24, 2019