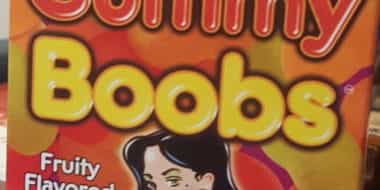 This may be the first time I’m publicly talking about my boobs (except for the short stint doing Sophie Tucker jokes as a Bette Midler impersonator just after college). But I’m sure it’s not the first time others have discussed them. After all, I’ve been a DD since 7th grade. To make things worse, my nickname until I was 20 was DeeDee…aka “Double D.”

I’m not a good joke teller…I always want to deliver the punchline first. So right off the bat I will tell you:

1.) Yes, this is an “October is Breast Cancer Awareness Month Get Your Mammogram PLEASE” message and

2.) Yes, I did have breast cancer, but no worries. I just had my 3 year “all clear” follow-up appointment. I had a lumpectomy, reconstructive/breast reduction surgery, partial breast radiation and now, if I say so myself, have the best boobs ever (Thanks, Dr. Yao and Dr. Sisco!)

I thought Survivor was a rock band in the 80’s.

I’ve never talked about it since, because I never felt like a “survivor.” And I rarely talked about it at the time because I never knew when or from whom I might get “the look.” The look is that combination of pain and horror loosely shielded with an attempt at compassion. The one that says cancer-is-contagious-how-soon-can-I-politely-disengage-and-never-call-you-again. The one that says I will now look at everything you do through a lens of weakness. The look that was not my responsibility to bear nor to explain why you didn’t need to look at me that way in the first place.

After all, my cancer diagnosis is not about you.

Again, I say, get your mammogram.

I went in at 8 am on a Wednesday in July for a routine mammogram. I’d been meaning to schedule it since the previous October Breast Cancer Awareness Month when I’d seen all of the Facebook status updates, ads and bus stop signs. Of course I’d been getting reminder letters from my doctor. But this was all a ploy (like flu shots) by the insurance/medical/pharmaceutical industrial complex to incite fear and make money with unnecessary, costly, time consuming exams, right?

So there I was still in my lovely hospital gown, open in the front please. It was 10:15 am.  I had a 10:30 client meeting and I was a half-hour away. “I allowed plenty of time,” I thought, annoyed. 8 AM mammogram, done by 9 the latest—I would even have time to stop and relax or write in my journal.

First there was the mammogram, which I will refrain from describing. If you’ve had one, you already know. If you haven’t I don’t want to scare you away (and if you’re a man—don’t describe your prostate exam and we’re even).  Then there was the part where they say “Just wait in the waiting room and we’ll have the tech look at it.” Which I now know means “Hmm, there’s something strange on the film.”

This was not on my agenda that day.

“What? No!” I said with determination. “I just want to leave and get to my meeting.”

Thinking she was clearly wrong and positive that I still couldn’t possibly have cancer, I asked, “What would you say if the biopsy came back negative?”

“I’d say that they’d made a mistake,” she replied. “Are you sure you still want to go to your meeting?”

Of course I thought, because if I pretend nothing is wrong, nothing will be wrong. I called the client. “I’m running a little late, but I’m on my way,” I said cheerily. Or would that be manically?

I had the biopsy less than a week later and they confirmed a small lump that was Stage 1 cancer. I was supposed to leave in the next 10 days to go with my mom to Paris to celebrate her 80th birthday, a once in a lifetime trip for her. “Can I go to Paris, first,” I asked? I was given permission to go but counseled to schedule surgery as soon as I got back. I had all of my “pre-surgery” appointments set before I left. I got back on a Wednesday, had the first surgery to remove the cancer on Friday and the second surgery, for reconstruction, a week later.

My husband was left with the task of telling our son—I couldn’t bear to do it. He did it on their ‘boys’ road trip while I was on the ‘girls’ trip with mom in Paris. The report back from my son was that it was sort of a Jack-Kerouac-indie-road-trip-movie kind of experience, where it was intimated I might die (that was never even mentioned, given the early detection, by the way).

Now my turn to say it: I have cancer.

The same day my husband was telling our son I might not make it (maybe I should have been the one to break the news), my mom and I spent an amazing day at the Louvre followed by dinner at Le Petit Prince, a wonderful little restaurant on a small cobblestone pedestrian walkway. Then we took a stroll to the spot nearby where Woody Allen filmed Owen Wilson getting picked up by Scott and Zelda Fitzgerald in Midnight in Paris. Finally we settled into a typical Parisian outdoor café for one final nightcap.

“I have to tell you something,” I told her, after a sip of wine. “I have cancer.” I explained that the doctors expected a good outcome, as indicated by my reprieve to come to Paris.

“This was such a perfect day,” she said, “couldn’t you have waited to tell me?”

But there is a good time to get a mammogram, and that’s today.

This post is the first in a series on my cancer story, for October Breast Cancer Awareness Month. Read them all!

Week 2: How to be a friend to someone who has cancer.

Week 3: My Cancer Story: Things I wish someone had told me sooner.

Week 4: What Scares you Dares you

How to Build Real-Life Relationships with Digital Tools
August 23, 2020
Search this Site
Categories
Go to Top