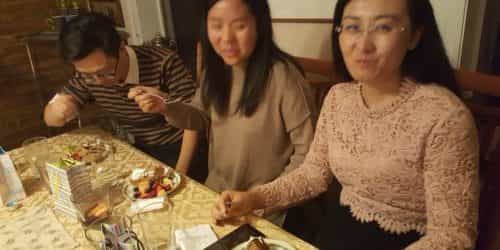 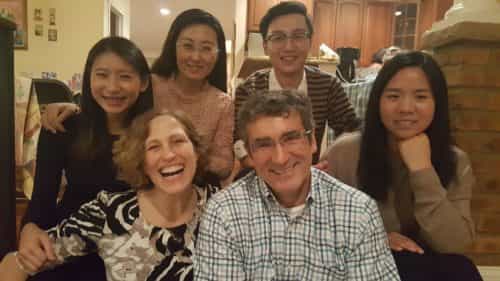 How do you demonstrate your values in day-to-day actions at home and in business?

It dawned on me that I only have a year left to force feed my values to my son before he graduates from high school. He’s already stopped listening. And he outgrew his car seat so I can’t force him go places with me.

As if actually being part of an intercultural, interfaith family isn’t enough, I want my son to go out into the world embracing our intercultural values. WorldChicago to the rescue! They make local arrangements, including hospitality, for international visitors sponsored by the U.S. State Department.

It’s a way for us to foster person-to-person diplomacy right in our home.

Since we got involved last year, we’ve hosted dinners for people working in social justice and NGO’s from Colombia; government prosecutors from Brazil; retailers from Nepal (the entire delegation came to our block party in July!) and a group from Saudi Arabia and Palestine with their Sudanese born translator.

Through loving eyes, slightly blurred by Tramadol (I herniated a disc just days before, and, as I explained to my husband, “You can’t cancel Thanksgiving!) and a humorous affection for dysfunctional families (including my own), here’s why I love hosting international visitors for Thanksgiving:

There are no calls that the dog barfed or a kid threw a tantrum. They are actually honored to be included in an important event and will conscientiously arrive at the specified time. 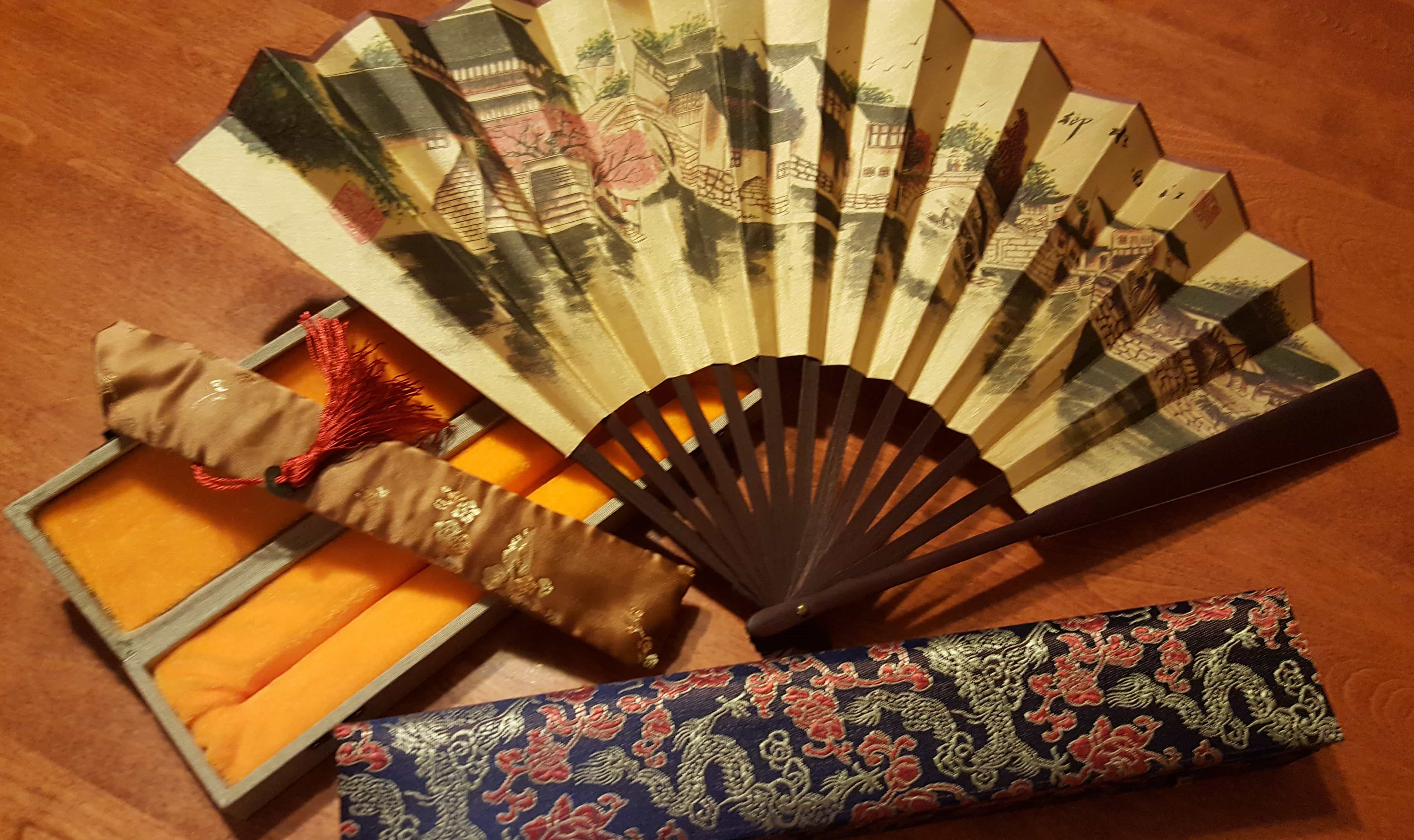 This is a wonderful tradition! In China the boxes alone are so beautiful they could be gifts in and of themselves. Although this could have been a scene from a sitcom. My son and mom (who doesn’t even live with us) lined up to graciously accept the beautiful fans and purse proffered by our guests. Good news, it means my son is embracing cultural exchange. And my mom, at 83, told me it was only temporary, the purse would eventually be mine again anyway. 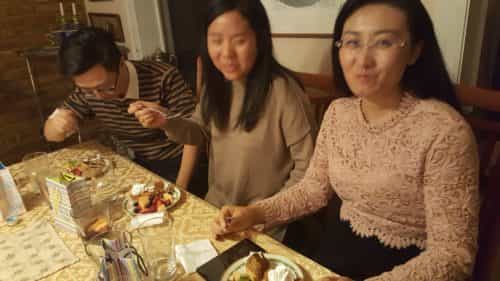 Abdulaziz from Saudi Arabia ate only one pickle and one olive at last year’s Thanksgiving Dinner. “We’re Jewish,” I tried to reassure him. “I swear there’s no pork!” But that was an anomaly. This year’s guests from China made up for it, with three helpings of appetizers and four trips to the dinner buffet. And they had never tried turkey or pumpkin pie! What a joy after a week of planning, prepping and cooking to have everything be so thoroughly and unabashedly enjoyed. We even sent them home with doggy bags. Makes a mama proud!

No tantrums, outbursts or fighting with the other guests. No asking for dessert when everyone else has just first sat down to eat. Just really wonderful and engaging conversation.

Of course my sister will invite us to her house as well, and we will love it. But she’s in Oak Park. We now have standing invitations for home-cooked meals in Shanghai, Rio, Kathmandu and Bogota.

What are your “American” Traditions? 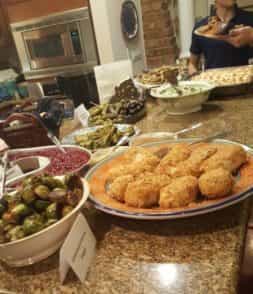 I read something when my son was young that said if you want your kids to carry on family traditions when they grow up, you have to create them now. That was enough for me to claim Thanksgiving. My grandma’s sweet potatoes with toasted marshmallows; elaborate, often edible name place cards; a festive seasonal cocktail and Mama Stamberg’s Cranberry Relish, are among our yearly must haves.

For visitors at other times of the year we have served Chicago-style pizza. Chocolate Chip cookies are always included—my definition of the most delicious, uniquely USAmerican food item that you can’t get anywhere outside of the US.

“I learned to do things that go hand in hand…with what I believe. That’s how you make your brand strong.” That was Kevin Hart in a cover story about him in Adweek. It’s how you make your family and your community, strong too. Beyond food, how to you put your values into action to set an example? How about the USAmerican traditions of kindness and being open-minded and open-hearted? Is that naïve? Hopeful? Aspirational?  Or maybe just actionable. Starting at home. Starting today.

Addendum: What is WorldChicago?

WorldChicago is a 501(c)(3) nonprofit organization dedicated to promoting citizen diplomacy through programs that connect the Chicago community with the world. WorldChicago facilitates collaboration between people from all over the world to advance national security, economic development and social justice.

Sign up for the World Chicago weekly enews to hear about upcoming hosting opportunities (homestays, fellowships/business, hospitality and more).

The Delegation from China

Our esteemed guests were among 11 delegates from China brought in by the U.S. State Department to learn about Transportation and Infrastructure Standards and Financing in the U.S.

Special thanks to our interpreter, Zoe Hwang.

started at the China Association of Automotive Manufacturers (CAAM) six years ago as the personal assistant to the general secretary, moving to the research division a year later. Today, he is the assistant director for one of the largest divisions at CAAM, where he develops the Chinese market and help foreign and Chinese brands to increase their value. He monitors and analyzes automotive industrial and economic operations.

is a scholar at a think tank, the China Center for International Economic Exchanges. Her area of focus is energy, specifically electric and power system reform. This has been her main research focus since 2007; she has studied other economies’ energy infrastructure in order to understand best practices. Dr. Jing is also an advisor to the National Development and Reform Commission, China’s top economic planner, and the Ministry of Energy on energy-related issues.

engages in data science for CAAM. She collects data from member companies to compile the necessary statistics for government reports and requests. For example, her research finding that vehicles with 1.6 liter engines are affordable and efficient was used by the government in creating a subsidy for that vehicle type. Ms. Li and her department also edit and publish annual statistics on the Chinese automotive industry, as well as monthly production, sales, and economic forecast data.

Middle East North Africa: One Size Does Not Fit All
December 9, 2017
Search this Site
Categories
Go to Top