Communication from English to English 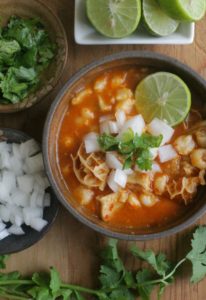 My husband and I went to Café El Tapatio in Niles the other night (very lively and delicious, fyi). There was a sign taped to the door saying “Menudo served on Saturdays and Sundays.”

It was a cold night. We were planning for chicken soup and margaritas to warm up. Out of curiosity—maybe this was a traditional dish we could try–I asked our waiter, “What is Menudo?”

“It’s like a boy band,” he answered. “They were really popular in the 1980’s. Ricky Martin got his start there.” I was waiting for him to say “Just kidding, Menudo is…” and then he would explain what it was (it’s tripe soup).

But instead he said “let me give you a few more minutes on the menu,” and he walked away. He was serious.

This was hilarious to me because I always think I am the most low-context person I know. High vs. Low context relates to how much meaning you glean from the setting of an event, versus the actual words that are spoken. USAmericans are traditionally low-context (the meaning is in the words) vs, for example, people from Japan, where context and setting are everything.

Given that we were in a Mexican restaurant with a sign on the door that said “Menudo tonight!” I actually have no idea why in 2019 he thought that instead of a question about the menu we wanted his opinion of the 1980’s band Menudo. (For anyone super low context, I can confirm the band Menudo was not performing at the restaurant that night.)

I had to ask him. “I love language and communication,” I said to him. “Maybe because I speak different languages I’m always fascinated by how people hear the same thing and interpret it differently.” To which he said “Oh, right. I can understand why you might have been asking about the Menudo on the menu.”

“Is your message getting lost in translation from English to English?”

Words are really icons. They are icons for objects and concepts and ideas. And, for each of us, all of those objects, icons and ideas gain meaning through our own experiences and connections to them. It’s the best that we have.  But double checking if someone really understands what we are saying, or what we want to know, is critical. Because even with a common language, we have individual interpretations.

In the end, our experience at El Tapatio was a fun anecdote. And we learned that our waiter had a new Ukrainian girlfriend and was excited to begin learning Russian. He had registered for classes that begin next week.