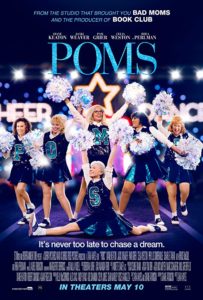 I almost didn’t see Poms because of the poor reviews. That alone is a good lesson, because of how fun and uplifting the movie is.

Poms is about a woman, played by Diane Keaton, who moves into a retirement community knowing she is dying. She’s required to join a club, per the community center rules. When there aren’t any clubs to her liking, she starts a cheerleading squad. She had always wanted to be a cheerleader and missed her chance when her mom got sick when she was a teen. They hold tryouts and the squad ends up entering a competition in the 18+ category.

And they have a lot of fun along the way. Yes, it’s light and airy (except, and this is not really a spoiler alert, the part where she dies) It’s funny, poignant and hints at some of the emotions, dreams and desires that accompany aging.

Here are three lessons I learned and why I encourage you to go to see the movie Poms (or watch it on video at the bottom of this post):

Usually we are the ones making up rules that stop us from doing things we want to do. I’m too old. It’s too crazy. It’ll be too hard. Sometimes all we have to do is give voice to our owndreams for others to get on board. Why not? And “Who Cares” are pretty powerful here. 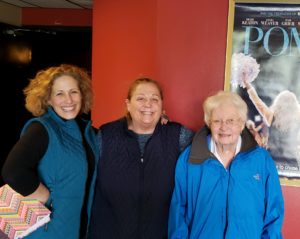 This last lesson comes from Sue who is 67. Sue was at the theater the same day as I was. She was with her husband and her 96 year old mom, Brunhilda. All of them loved it. Their laughter was boisterous and infectious throughout the movie. Sue and her mom said the movie was inspiring. It made them want to keep trying new things and go out with a bang!”

The critics did not like this move. The reviews were 32% on Rotten Tomatoes. Guess what? My 18 year old son would have given it a bad review too. Because people much younger than the demographic for this movie wrote most, if not all of the reviews.

Everyone looks at things through their own lens of experience. And that shows. Audience reviews were 78% on Google.

Conclusion? Don’t let the reviews fool you. Go see Poms. Show that people over 50 are a market. We still got it goin’ on!

How to Build Real-Life Relationships with Digital Tools
August 23, 2020
Search this Site
Categories
Go to Top