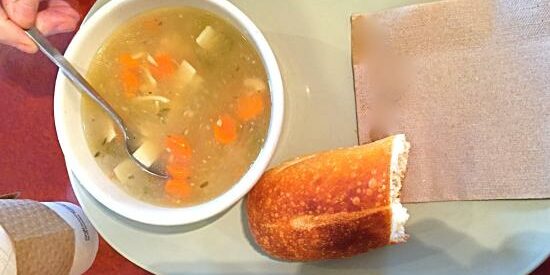 Every day lessons on bias. I thought I was just ordering soup.

I was ordering soup at a coffee shop a few weeks ago. The young woman behind the counter could not have appeared more bored. Her head was resting on her hand. Atop her elbow that was resting on the counter. She could barely keep her head up.

My knee-jerk reaction was negative. “Insolent. She doesn’t like older people. Disrespect for good old customer service,” I thought. Instead I drew something from the intercultural toolbox: assume positive intent. I took a deep breath and asked: “How are you doing? Are you feeling okay?”

And she didn’t respond “I hate you because you are old,” as I assumed. What she said was “I’m sick. Did you notice? I want to go home, but my manager won’t let me.”

“Doesn’t your manager realize that it’s not a good reflection on the business to have someone sick serving food?” I asked.

“Do you want to talk to my manager?” she responded.

She went and got him. As soon as he came up and I opened my mouth, he said “she’s going home in a few minutes.”

Bias is in the knee-jerk

It is natural for humans to have immediate responses to everything we perceive—people, places, things. The key is to recognize our own lens through which we see things, and then move that aside and use other approaches to fully understand something.

In the end, my immediate perception of the young woman was wrong. And (as is so often the case) her behavior had nothing to do with me. She didn’t feel well.

But I was also wrong about—or never even considered–how she perceived me. I am likely her mom’s age. Perhaps to her I looked like someone who would care and could help her. Which, it turned out, I was and I did.

And the other lesson is be present and involved. And help how you can, when you can.