‘How Many Bushels Am I Worth?’ to Make January 2020 Debut in Providence, NYC 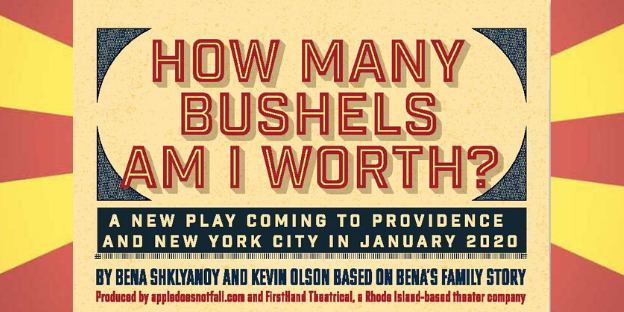 Five Decades Since First Wave of Jewish Emigration From U.S.S.R.

New York, Nov. 18 – The play “How Many Bushels Am I Worth?” will debut in January 2020 in Providence, Rhode Island, and New York City, marking five decades since the first wave of immigration of Soviet Jews to the United States.

Written by Kevin Olson and Soviet émigré Bena Shklyanoy and based on her life story, the performance captures a Kiev family’s agonizing decision in 1976 to flee the Soviet Union for America and the challenging adjustment period that followed.

Through the lens of the Shklyanoys’ emigration, the play highlights a unique time in Jewish history: when establishment organizations and grass-roots advocacy groups coalesced to secure the release of Soviet Jews.

“We didn’t know a soul, and just followed blindly,” Shklyanoy said of her immigration to Chicago with her husband and two young daughters. “The Hebrew Immigrant Aid Society [HIAS] was the primary force behind our journey to Vienna, then to Rome and finally, to the United States.”

Her parents came to Chicago several months later, and her mother was the 1,000th Soviet immigrant to land at O’Hare International Airport. As a result, images of the family appeared prominently in The Chicago Tribune and the now-defunct Chicago Daily News.

While the play focuses specifically on Shklyanoy’s family, it illuminates such universal themes as identity, values and solidarity, still relevant for refugees fleeing oppressive regimes around the globe today.

The play opened in August 2018 to sold-out audiences and critical acclaim in Chicago and is produced by AppleDoesNotFall.com and FirstHand Theatrical, a Rhode Island-based theater company headed by Olson that adapts primary source material.

“There are not many first-hand representations of this generation who grew up in the Soviet Union,” Olson said, adding, “Against the backdrop of today’s politics, it seemed serendipitous to present a work that offers us a glimpse of individual lives under Soviet rule, while perhaps providing some insights into Russia’s current leadership.”

During an 11-year period, Shklyanoy documented more than 150 years of her family’s history, connecting with newly discovered relatives in the process.

This chronicle of her family’s life through two World Wars, the Bolshevik revolution, annihilated shtetls (villages), the Holocaust, the Soviet empire and finally, the large-scale immigration of Soviet Jews to the United States, can be found on her website AppleDoesNotFall.com. Shklyanoy and Olson also authored an earlier companion piece, based on these historical findings and titled “And Then What? The Children of Velvel and Sheina-Gitel Averbukh.”

For more information about the January 2020 performances and to purchase tickets, go to: AppleDoesNotFall.com/plays/.

The website AppleDoesNotFall.com showcases the life story and family history of Soviet émigré Bena Shklyanoy, whose family left Kiev in 1976 during the first wave of Soviet immigration to the United States. The site also houses her compelling blog, featuring stories of adjusting to America as well as Soviet cultural insights.

FirstHand Theatrical, based in Providence, creates original theater pieces that draw from diverse cultural and social histories. Working from primary source material, these original theater productions include personal histories and reflections around a common theme. To learn more, go to: https://www.FirstHandTheatrical.org.

To learn more about sponsorship opportunities, go to: https://fundraising.fracturedatlas.org/first-hand-theatrical/general_support.

How to Act Jewish to Raise a Jewish Child
November 15, 2019
Search this Site
Categories
Go to Top