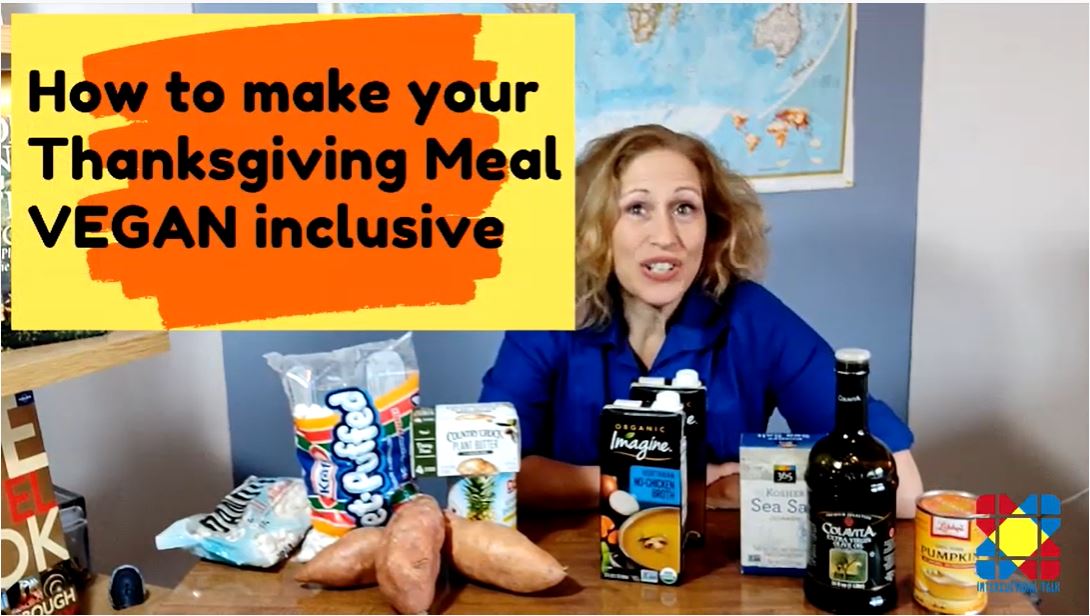 Your high schooler just announced two weeks before Thanksgiving that they’re now Vegan. Your college freshman is bringing home a new significant other and they are vegan. Your mom died and was resuscitated and now thinks that all life is precious. That last one is our story, along with a sister who’s been vegetarian since childhood, and another who’s an animal rights activist.

For my family we are majority vegetarian or vegan. In fact it’s only me, my husband and son who are not vegetarian. And I LOVE to host.

(Keep reading, or pop to the bottom to watch on video.)

How to make a Vegan Inclusive Thanksgiving Meal

American Heritage Dictionary defines inclusive as “Including the specified extremes or limits as well as the area between them.” Which probably is a good definition. And using the intercultural inclusive lens—yes—meat eaters, while the majority in USAmerican Culture, could still be considered an extreme by the other. So, inclusive gives validity at all. And, seeing as the food is not supposed to be the focal point anyway (you know, it’s the love, the gratitude and the family) the goal for the menu is to make sure there’s something for everyone—while not making it ridiculously hard for the host.

We’ve been doing this for years. I find there’s just a few easy things you can do with things you find regularly at the grocery story to make your holiday classics vegan. I recommend making your side dishes vegan…and then just hide the turkey in the kitchen.

A quick note first on the difference between vegetarians and vegans. Vegetarians don’t eat anything with a face. So, and I’m sure this isn’t you, but don’t ask a vegetarian if they eat fish. Fish have faces. So do chickens.

Vegan is nothing with a face nor any of their byproducts. So no milk, eggs, cheese, even honey (the bees!)

Tips for the classics 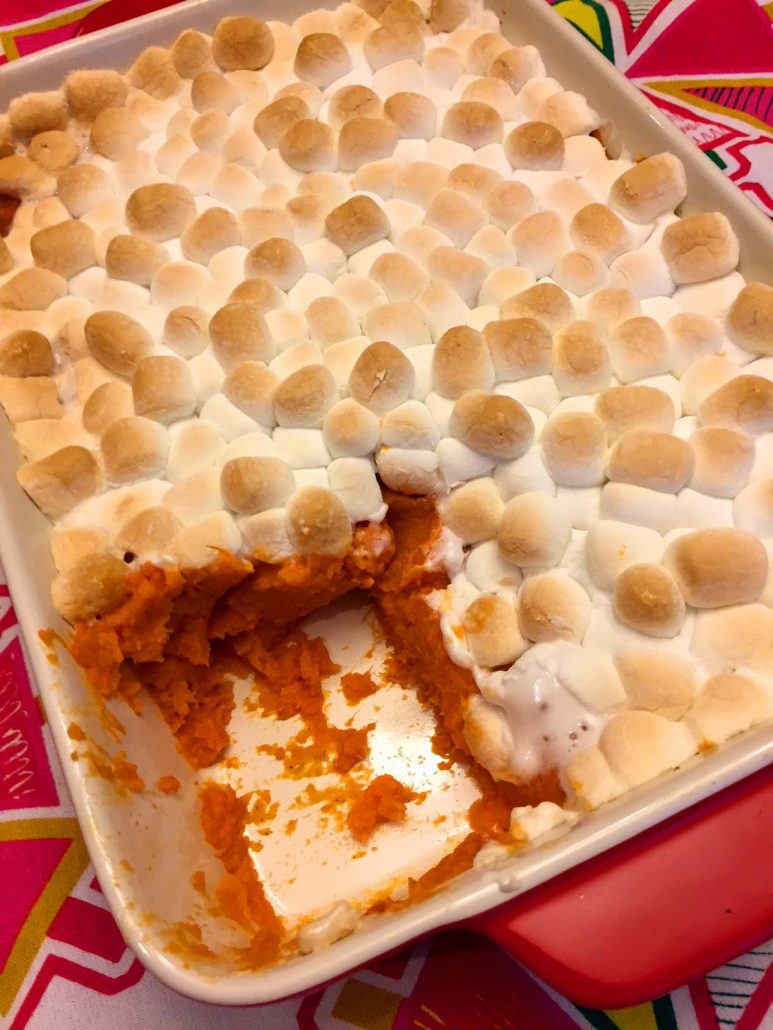 For butter, which is key for Grandma’s sweet potato recipe, switch butter for Margarine. Butter is made with milk, so not vegan. Margarine is vegetable oil based. But, and this is a big but…read the ingredients—while it says vegetable oil on the front—sometimes there’s whey or casein, both of which are milk products—or sometimes even milk. This year I found a new product at “the Jewel” (Chicago’s local basic grocery store) from Country Crock, a plant based, dairy-free ‘butter’ with either olive oil or avocado oil.

I bake the sweet potatoes because they keep more of their rich flavor that way, mash them with the vegan butter, brown sugar and cinnamon. Grandma always added crushed pineapple, too. If you set aside a portion at this point, they will be delicious and 100% vegan—before smothering them in marshmallows and putting them back under the broiler. Why? Because marshmallows are made with gelatin, which is bone marrow.

Which means your gelatin mold also is NOT vegan. But that’s okay. As the host you are making your dinner inclusive. It doesn’t mean 100% of your dishes have to be vegan, if 100% of your guests are not vegan.

I did find a package of vegan marshmallows this year that look good. But I think these will just be a gift to my sister the vegan—not sure how they taste or melt. 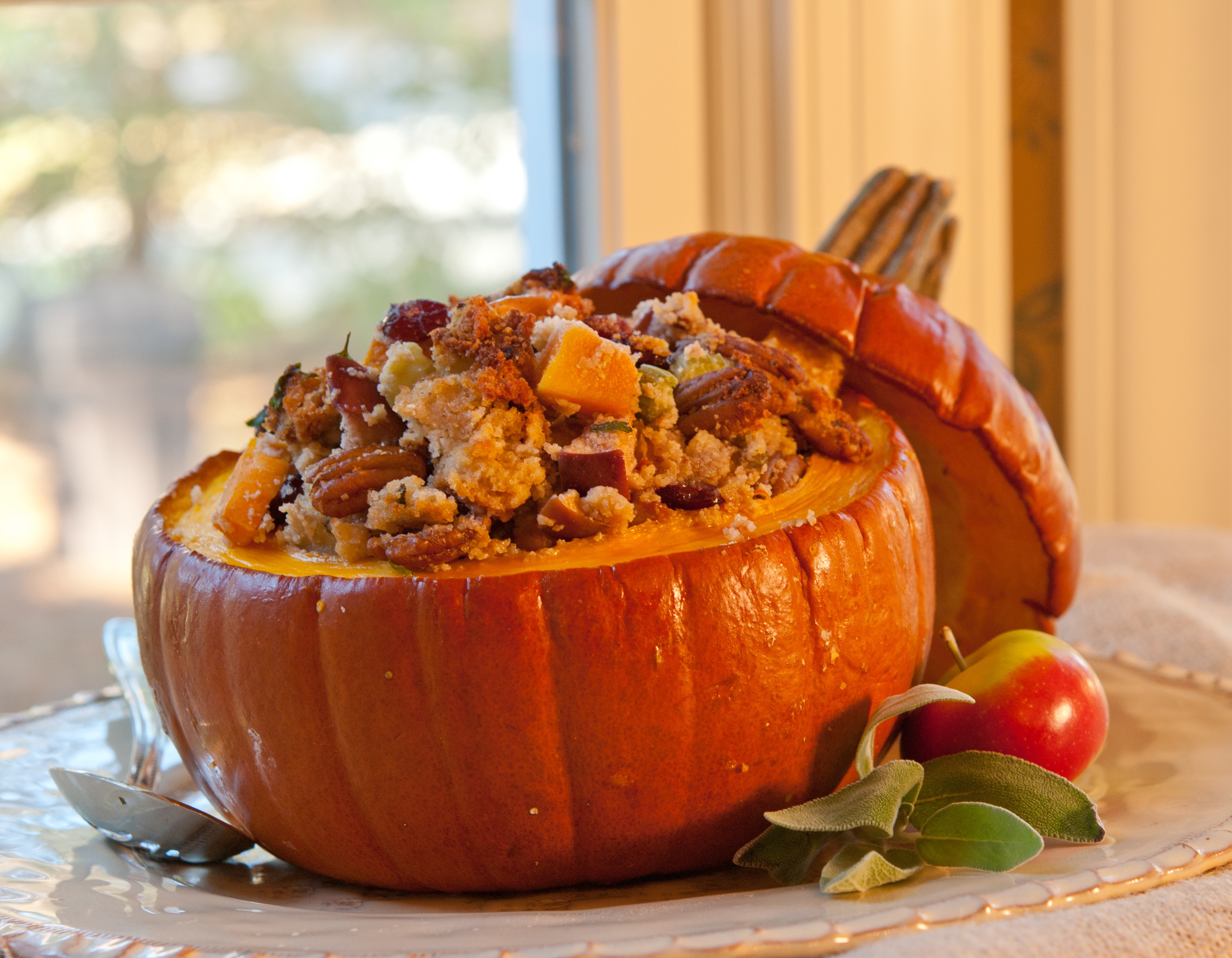 For stuffing, the broth is the biggest issue, since chicken broth is one of the primary ingredients. There are, of course vegetable broths. I find that those don’t taste quite as good. They often even have tomato which is not a great mix with the other flavors.

Better is the “No Chicken” broth from Imagine. It’s available at most grocery stores where you find the other broths. Of course the name “stuffing” comes from the fact that it is stuffed inside the turkey. But baking also works and doing it inside of a bright orange pumpkin makes a wonderful display for your festive table.

Again—you need to read the ingredients on the stuffing bread or mix. For example, Stove Top’s sage dressing sounds vegetarian but has chicken bullion listed as one of the ingredients. The Brownberry and Pepperidge Farm mixes I found were 100% vegan. And, now, with Beyond Meat which tastes so close to the real thing—we may even try a vegan corn bread sausage stuffing.

Olive oil and sea salt have always been vegan. They are easy go to’s for roasting Brussels sprouts. Or you could sauté green beans and then sprinkle those yummy crispy onions on top. We love the caramelized carrots–made with vegetable oil and sugar. So good you wouldn’t even know they were once a vegetable!

For Vegan pumpkin pie you may be better off just getting it at Whole Foods or another market that sells it. The recipes I found for Vegan Pumpkin Pie veered astray, using tapioca starch and ground-up dates and other such things as binders. That said, there are many delicious vegan Pumpkin Cake recipes. Just Google vegan pumpkin cake and scroll till you find one that matches your style.

(Whisper) and Now the Turkey

We do both a turkey and a vegetarian roast. For the Turkey—I know for many the drama of the fully roasted turkey on a platter on your table is a tradition. But some see it as only the dead animal—which, technically it is. We slice the meat keep the platter on the other side of the table from the vegetarians.

As for roasts—Worthington makes a great one—although it’s so good it’s back ordered until after Thanksgiving. Tofurkey is probably the best known, and the brunt of the most jokes—but it’s not the most flavorful. We will likely go with Gardein which makes a roast stuffed with a rice stuffing. That can be sliced and put on a platter at the other end of the table.

A final note on inclusivity

Keep an eye out for people who might be alone. Divorce. Loss. International visitors. There’s a variety of reasons, both happy and sad why someone might be alone on Thanksgiving. Do a “mitzvah” (Jewish name for good deed) and invite them to your home.

Perhaps you can ask them to bring a vegan pie for dessert.