Being White in a Black Majority and Calling Out Unconscious Bias 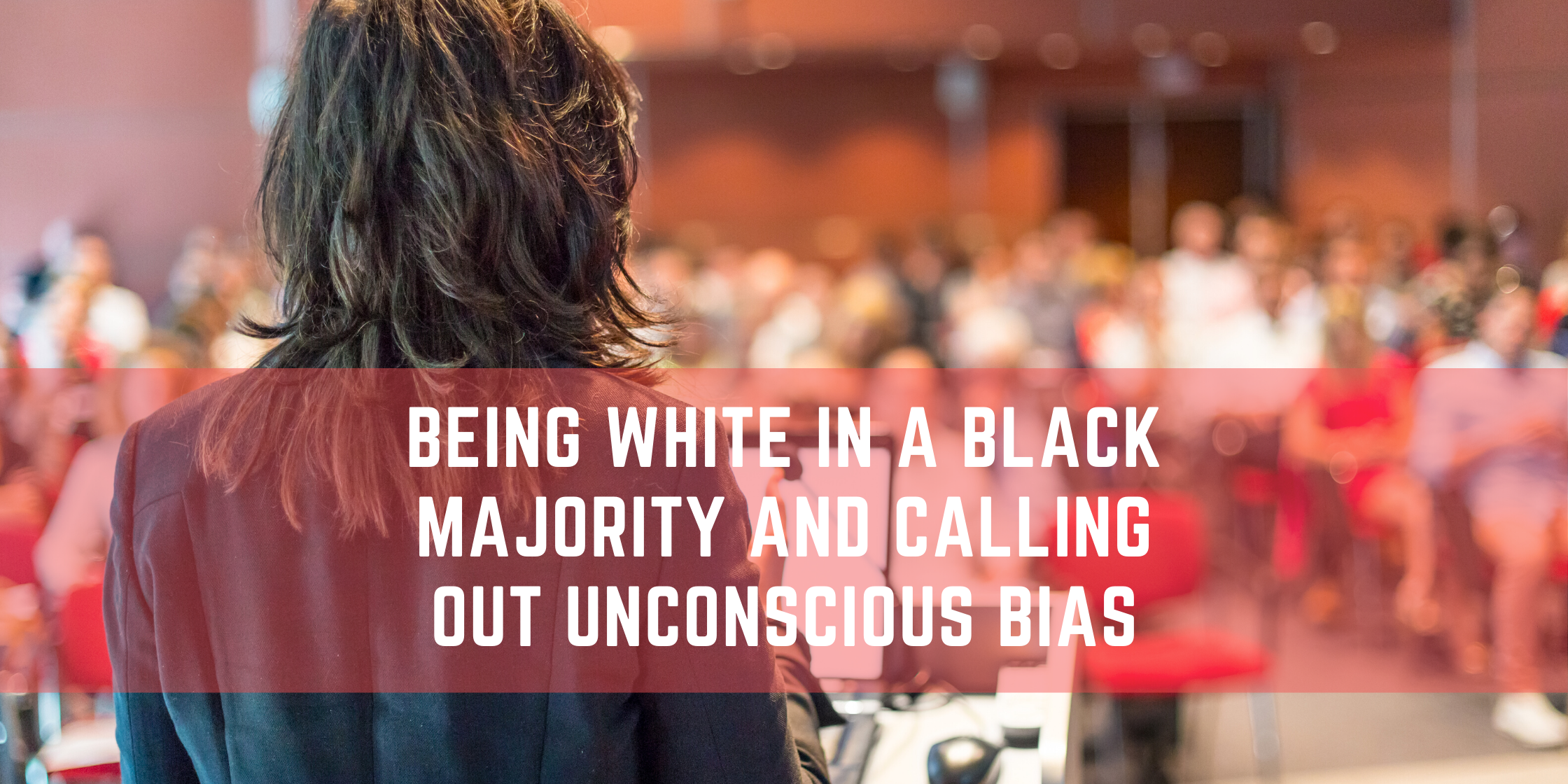 Intercultural Talk was a blog before it was a business. I started it in 2008, writing about unconscious bias and stereotypes in advertising. Now both of those topics are front and center–the former having morphed into a full-fledged training* and the latter, while still in a process of improving, having been blown up by purposeful inclusion in advertising.

*Note that unconscious bias training alone, simply to be aware of your biases, is not enough. You need tools and language to recognize bias and not let it still influence every day knee-jerk reactions. (See more on that, here).

May I Have a Do-over?

What you don’t want to do is what I did–in 2011–on # 3 below. I cringe reading it now. It basically was me excusing myself for not calling it out when Philip* said he was colorblind. Now something like that would be a great chance to have a deeper conversation. My new #3 would be educate yourself and equip yourself to have honest conversations and to be able to explain underpinnings of bias that are synthesized and parade as “norms” in the US Business place. For example: “I understand, Philip, how you would see that as a good thing–not letting someone’s race cloud your perception of their ability. On the flip side, not seeing someone for who they really are, including their race, gender, etc. may come across as not seeing them at all, or not fully embracing what they bring to the workplace. Has anyone else experienced this from the other side? How did it feel?

I now see this moment as a chance to exercise your white privilege to be an ally. The “leader” thing to do would have been to leave the slides (even the backup ones), and to talk about this real issue. Take a read below to see what I’m talking about. What do you think? How would you have handled it?

This post has been brewing in me ever since I spoke at the kick-off meeting for the Chicago Chapter of the National Association of African American Human Resources Professionals last month, entitled “Let the Power of Diversity Work for Your Business,” that talked about diversity and inclusion as a competitive advantage in a global economy, and included lessons and activities around Inclusive Communications Strategies.

Why “brewing,” and not the implied “spontaneity” of a blog post?  Because the description above uses perfectly refined, planned, and politically neutral language that doesn’t really convey two episodes of what I believe to be unconscious bias on the part of two of the three lone white people in the room of otherwise 30+ African-Americans during the session.

The first one was me (ouch!), one of three Caucasians and the “subject matter expert” leading the presentation.  Not sure who/how many caught what I would call my “gaffe” but here’s what happened.  I dove into the strategies and activities, without giving an overview of what we mean by Diversity and Inclusion in the Workplace.  As more general questions started right away, I realized immediately my unconscious assumption:  That because the audience was African American, OF COURSE everyone would know about Diversity and Inclusion in the workplace.  But, indeed, that field is just like any other area of expertise, you study it, there are best practices, there are academic studies….

Luckily, I had learned my lesson from the last time I had made fun of someone from another culture (now I’m being playful, even flirtatious, because I’m talking about my Brazilian-born husband in contrast to my Missouri-Jewishness) and had a batch of “Extra Slides” at the back of the file that had the “Business Case for Diversity and Inclusion” in place and ready to go.  There’s buried in here somewhere a 15 year overdue apology for making fun of my husband because when he was working on his MBA he occasionally would ask me to proof his presentations.  “But they’re 100 slides!” I’d protest. “No, it’s just the first 10,” he would say, “the rest are back-up.”  To which I would think, “Whatever.  No one in the United States does it that way.”

At any rate, thanks to following my lovely husband who didn’t know what he was doing, I was able to seamlessly (I’m pretty sure it was seamless to most) pull up the overview slides from another presentation I’ve given in the past,( presumably to white people—my commentary here) and give the overview with authority.

So then we went into my favorite part, Intercultural Communications.  It’s my favorite because I live and breathe it. I’m a marketer by profession, and specialize in communicating to people of different backgrounds.  Understanding the various communications styles, recognizing my own, and how all of these might be influenced by cultural and gender differences, is fascinating.

So here comes unconscious bias number two, from Philip* who was from one of the area’s larger Public Relations firms.  Philip was #2 Caucasian at the event, and his colleague Martha made the third and final (I think it’s important, just because I think my reactions to things were possibly influenced by being in the minority—which makes me hyper-conscious, curious if it’s typical when being in the minority to temper behavior, and of course curious about grave implications for that in the workplace, etc…)

Oh, we were talking about Philip.  So the conversation was about Communications Styles. “Direct,” which puts facts over people to divine truth and understanding, and “Indirect” which looks at feelings and relationships first.

When I asked the group if Direct or Indirect was more prevalent in the workplace, all said “Indirect.” Which, as a Direct communicator I thought “are you kidding?  US Business norms are all about results and action, normed around a male, Western European communication style.  But, again, this is not about me….

And that’s when Philip, in HR asked his question.   “But if it’s only 50% to 80% then really it’s not a statistic at all.  I tend to evaluate each person individually and build relationships with people one at a time.”

My gut thought was “like being colorblind.”  And the immediate reactive thought to that was (okay, that’s the problem, I knew something was wrong at the time, but it took me a good week to really think it through) the problem with the colorblind approach is that it is often the privilege of the majority culture to be color blind.  Because the structures of society, and certainly the USAmerican workplace, are normed around the majority culture.  So what I could have said was “That’s actually belies your white privilege, Philip, because as part of the majority culture you are not constantly reminded of your race or culture.”

But what I said was that while the trends shouldn’t supplant what’s in front of you, nor should groups be stereotyped by their dominant communication style, that it’s helpful as a framework to better understand one’s own style and to make sure that the reward bands—which people in the organization’s ideas and contributions are valued, are not being influenced by communication styles.

Or, as Marti Barletta, accomplished expert in marketing to women, told me when I asked her the same question a few years ago, “you have to start somewhere, and because the commonalities to play out over a certain portion of the population, it gives you a starting place from which to operate.”

Luckily, Steve,* an HR Director at a major Chicago corporation (and African-American) then chimed in to say how effective it had been at his company when they did take into consideration the cultural implications of communication, and we moved on.

So, my 10 minutes is up (it morphed into 25…yikes!) and really this could have been summarized in three sentences:

On that last one, though, while it may make me a great, consummate professional, it might not catapult me to ideological fame.  I’m reminded of seeing Gloria Steinem speak at an event in Chicago a number of years ago.  She espoused these amazing, controversial opinions, and had no qualms about calling it out like it was.  “She’s fabulous,” I remember thinking.  “I wish I could be in a position to say whatever I thought and have people listen.”

But that goes one further, to the idea that “when your mouth is open, your ears are closed.”  So maybe I’m not too far off.

What are the interactions that make you uncomfortable, that have you still thinking about them three weeks later?  Those are the ones to follow…