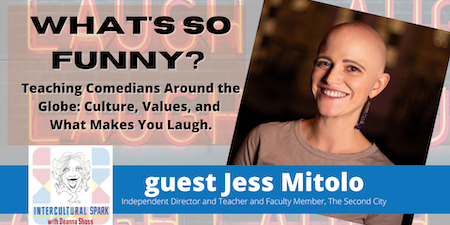 Things are funny when they resonate with our values, and values are connected to culture. So what’s funny is drastically different from culture to culture. Or is it? We go deeper insight when Jessica Mitolo joined Intercultural Spark on October 7. As a faculty member at The Second City Training Center, Jessica teaches improvisation and comedy writing to students of all ages and skill levels and recently returned from teaching Second City’s training programs in Jordan, Romania, and China. Independent of Second City, Jessica has trained comedians in over 10 different countries including Lebanon, Bratislava, Krakow, Germany, Bulgaria, Hungary, and Czech Republic.

(See the replay, embedded at the bottom of this page)

Originally from Youngstown, Ohio, Jessica Mitolo is currently a Chicago-based director and teaching artist. In addition to teaching around the globe, for over five years Jessica worked as a Lead Teaching Artist in Open Book’s Read​Then​Write Residency Program where she traveled throughout Chicago, teaching reading comprehension and creative writing to students in underserved communities. She leads corporate improv and idea generating workshops for corporations and has directed more than 40 stage productions for various theater companies.

Key Insights from What’s So Funny?