The Intersectionality of Oppression 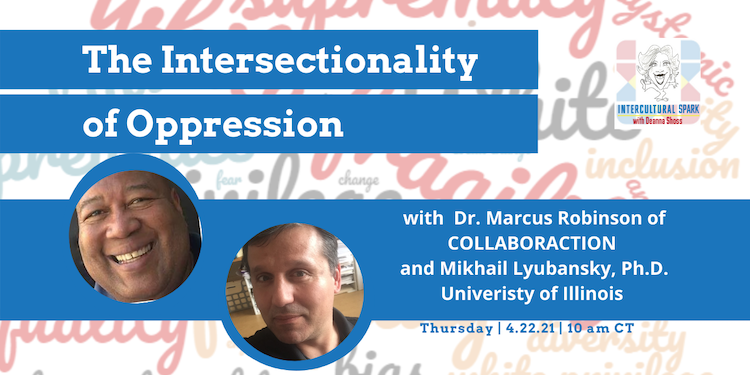 We’re talking all about the “whites”: white fragility, white supremacy, white privilege. And all the overlays and intersections of that related to oppression. It’s a tough topic so I brought in two doctors!

Mikhail Lyubansky teaches the Psychology of Race and Ethnicity among other courses at university of Illinois at Champaign-Urbana, he writes on race, culture and community for Psychology today, and for the past 10+ years has been deeply involved in restorative justice.

Dr. Marcus Robinson (Executive Director, he/him) is a thought leader on the issues of equity, diversity and inclusion. He has led community transformation and organization change initiatives throughout North America. At the core, he is an artist, mystic and educator. In his role as Executive Director of Collaboraction, he leverages a lifetime of creativity with a stellar career in nonprofit leadership to create devised theater to educate, inspire and promote positive change in our communities. (drmarcusrobinson.com)
Mikhail Lyubansky, Ph.D., is a teaching associate professor in the department of psychology at the University of Illinois, Urbana-Champaign, where among other courses, he teaches an upper-level undergraduate course titled Psychology of Race and Ethnicity and graduate and undergraduate classes on restorative justice. Since 2009, his scholarship and applied work have both focused primarily on conflict and restorative responses to conflict, working with a variety of entities, including schools, organizations, intentional communities, and the criminal justice system, in developing a sustainable infrastructure for restorative conflict engagement. In addition to multiple book chapters and peer-reviewed articles, Mikhail recently co-edited an academic text Toward a Socially Responsible Psychology for a Global Age and regularly explores racial justice and restorative justice themes in his Psychology Today blog: Between the Lines. Born in the former Soviet Union, Mikhail immigrated with his family to the United States as a child in 1977. He can be contacted at lyubanskym@gmail.com.
Category: Intercultural SparkApril 21, 2021
Tags: CollaboractionMarcus RobinsonMikhail Lyubansky
Share this post
Share on FacebookShare on Facebook TweetShare on Twitter Pin itShare on Pinterest Share on LinkedInShare on LinkedIn Share on WhatsAppShare on WhatsApp