The Unifying Power of Poetry with Michael Warr 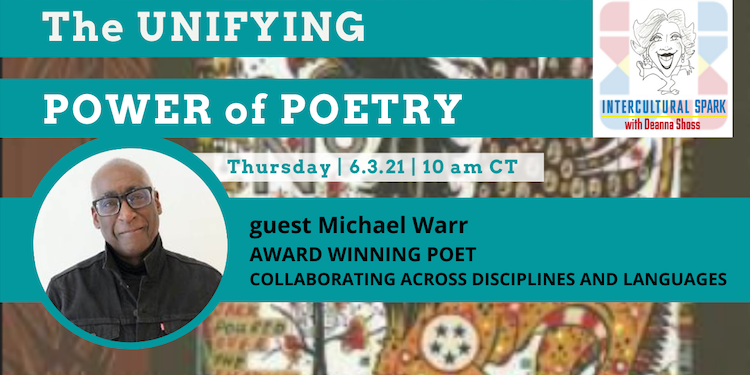 Michael Warr is an award winning poet who creates across disciplines and languages. Gwendolyn Brooks said he “has a sharp eye and a sanity that refuses to make compromises.”
Warr is a multi-media collaborator driving creativity removing barriers across languages and disciplines with his words and projects.
His books of poetry include Of Poetry & Protest: From Emmet Till to Trayvon Martin. His poems are being translated into Chinese via another ongoing project, “Two Languages-One Community” with poet Chun Yu.

More About Michael and His Work

There are two pages where Michael Warr’s poetry life and wanderings can also be found: Michael Warr’s Facebook Profile and CreativeWork by Michael Warr.
Michael Warr’s updates on the struggle against unjust police killings can be found on my book page: Of Poetry & Protest: From Emmett Till to Trayvon Martin and on twitter @ofpoetryprotest.
Michael Warr’s serial poem “What Not To Do…(an unfinished poem)” to which he has been adding the names of blacks killed by the police since 2018 will be published in its entirety this summer in Obsidian — Literature & Arts in the African Diaspora.

His daily posts on happenings in the poetry world including book releases, awards, poetry events, opportunities, and the unexpected can be found at Poetry, Etc. The Armageddon of Funk by Michael Warr.

For Chinese translations of my poems by poet/translator Chun Yu and our Two Languages/One Community collaboration bringing African American and Chinese communities together go to: https://twolanguagesonecommunity.com/.

Tracing Poetic Memory where Michael used poetry and digital technology to find clues of his family history in a once predominantly African American neighborhood in San Francisco that his family left when he was seven years old.

To buy Michael’s most recent book Of Poetry & Protest: From Emmett Till to Trayvon Martin online from the Museum of the African Diaspora (MoAD) go to https://bit.ly/3fCZWkM.  For all his books: https://amzn.to/2YNTYb6.

More links for Michael Warr (some are duplicates)

Board of Directors, Friends of the San Francisco Public Library

For updates on my art and consulting see Creative Work by Michael Warr. This link omits key information on mobile devices.