Peace Building at the Intersection of Social Justice, Education and the Arts with Dr. Wendy Sternberg 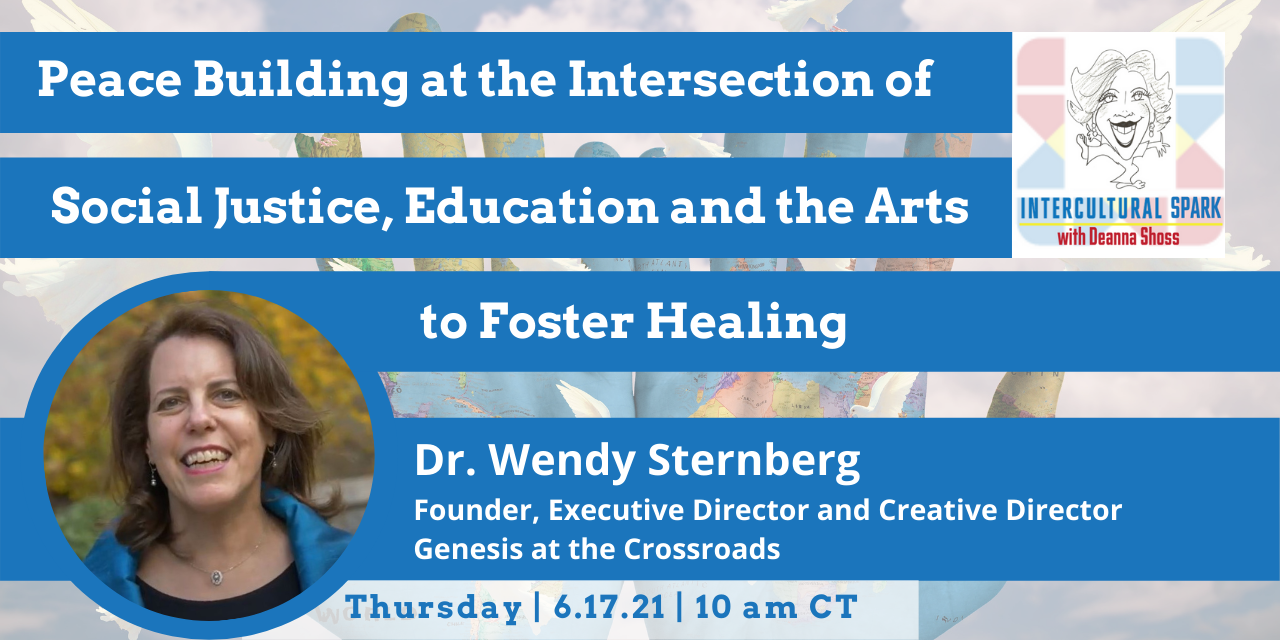 Affectionately called a Doctor without a Border, Dr. Wendy Sternberg has created and produced a body of inquiry-based salon programs on the intersection of human rights, human development and the role of the arts to help shape and inform a humanistic society and transform conflict.

She is Founder, Executive Director and Artistic Director of Genesis at the Crossroads, which boasts over 150 award-winning programs, internationally acclaimed by the UN, The Kennedy Center, The King of Morocco, the US Department of State and more.

Genesis at the Crossroads

As the founder and creative engine behind Genesis at the Crossroads, Wendy designed all programs to date and continues to oversee production and implementation of performance/artistic programs, education and humanitarian initiatives worldwide. She forged national/international partnerships with well over 45 institutions and founded Saffron Caravan, Genesis’ professional music ensemble uniting artists from Iran, Afghanistan, Cuba,

Since 2011, Sternberg has created and produced a body of inquiry-based salon programs on the  intersection of human rights, human development and the role of the arts to help shape and inform  a humanistic society and transform conflict. One annual salon series focuses on women’s  leadership. She masterminds the creative development/management of the current Genesis  Academy Summer Institutes for international youth leaders from areas of conflict as well as the  future Genesis Academy for Global Leadership, an academically rigorous boarding high school.  Its surrounding Peace Hub will include a teaching farm, Sports and Social Change Program and  a research incubator on creativity and leadership with multiple university partners. In the face of  the COVID19 pandemic, the Academy’s Social Entrepreneurship Center will begin virtually in April  2020 until the physical place-making of its Chicago’s South side campus comes to fruition in 2022.

Affectionately called a Doctor without a Border, her prior 20+ year career as a primary care  internal medicine physician informs the healing aspects at the heart of Genesis at the Crossroads.  Under her leadership, Genesis boasts over 150 award-winning programs, internationally  acclaimed by the UN, The Kennedy Center, Rotary, The King of Morocco, the British Council, the  US Institute of Peace and the US Department of State. A Rotary Peace Fellow and a Salzburg  Global Seminar Fellow, Today’s Chicago Woman Magazine featured her as a Woman to Watch.  She was named one of the 10 Jewish Chicagoans of the Year and was a 2011 Charles Bronfman  Prize Nominee. Sternberg is a member of the Chicago Chapter of the Woods Fund – Kellogg  Foundation’s Truth, Racial Healing, Transformation Task Force. On the celebratory occasion of  the 150th anniversary of Gandhi’s birth, Sternberg was deeply honored to be chosen as the closing  speaker, following the remarks of Gandhi’s Granddaughter, Nelson Mandela’s Daughter and  Cesar Chavez’s Grandson at the Gandhi 150: A Legacy of Peace program in Chicago in 2019.

During her 2009 Rotary Peace Fellowship at Chulalongkorn University in Thailand, her human  rights field research took place in Cambodia while the Khmer Rouge Tribunal was actively in  session. Sternberg interviewed former Khmer Rouge soldiers, UNHCR groups and those  documenting civil party lawsuit testimonials. She also worked alongside human rights legend,  Cherif Bassiouni on parts of his memoir about co-founding the International Criminal Court at the  Hague and prosecuting Milosevic and other despots. Bassiouni helped her frame her ideas for  the Genesis Academy human rights curriculum and mentored her through the early stages of the  process. She had the profound privilege of aiding him during the early stages of the Arab Spring.

Sternberg also serves as a physician public health strategist and human rights activist focused  on the COVID19 pandemic. In the face of the pandemic, she retooled Genesis’ 2006 Art of  Healing initiative into a participatory development program to serve as a health and wellness

remedy during the COVID19 pandemic. By design, Sounds of Healing’s cross-cultural  collaborative array of programs focuses on arts, trauma and healing.