You Teach Me, I Teach You: The New Age of Internships 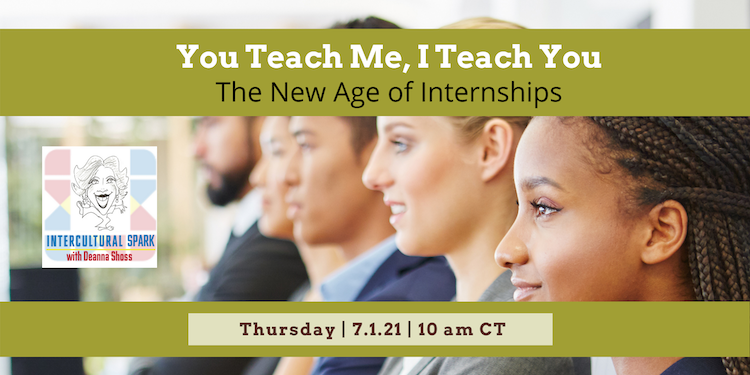 Internships are the essence of two-way, intergenerational exchange, with leadership, technology and more.

Lynn Hazan of Lynn Hazan & Associates is joined by two of her seven current interns, Fiona Noonan and Lily Lowndes, on the transformative nature of the LH&A internship program (think an alumni group of 100!). Sid Khaitan, former intern at Intercultural Talk and now a digital content creator, also joined.

More About The Guests

Lynn Hazan has been in the recruiting business for 36 years, and has been the founder and owner of Lynn Hazan & Associates (LH&A) for the past 21 years. She is a member of the DePaul Marketing Advisory Counsel (MAC). She has a long track record of working with interns from all over the world and has placed former interns. Lynn is an award-winning relationship recruiter and has a rule of three: Place the perfect candidate within the first three resumes provided. She’s also a lifetime achievement award from DePaul University Driehaus college of business Marketing Advisory Council. Her company, Lynn Hazan & Associates is an award-winning executive search and consulting firm specializing in marketing and communications placement. The organization celebrated its 21st anniversary in 2021. It represents employers across the United States, with a focus on Chicago and the Midwest. Clients include Fortune 500 firms, corporations, agencies, entrepreneurial firms and nonprofits. LH&A places candidates in full-time, part-time, project-based, and temp-to-perm positions. For employers, it offers recruiting, outplacement consulting and workshop presentations. Learn more at https://www.lhazan.com

Fiona is originally from Northern California and lived in San Francisco until she moved across the bridge to the East Bay at the age of five. She then grew up in Seattle, WA and lived with her family. Fiona’s hobbies include painting and tennis as well as writing. She was heavily involved in the student newspaper in High School, which sparked her interest in interviewing and advertising. Fiona decided to leave the West Coast and experience a new city for college, where she landed in Chicago, IL and attended DePaul University. Currently a rising Junior, she majors in Public Relations and Advertising and minors in Communications. Fiona has worked alongside Lynn for seven months, writing the weekly newsletter and conducting research to source candidates. She has grown exponentially and learned the value of being a part of a team that prioritizes relationships and collaboration.

Lily Lowndes (rhymes with silly sounds) is a Public Relations & Advertising and Journalism double-major at DePaul University, which means she loves to write, write, write! She uses her talent for outreach as the social media editor for DePaul’s student newspaper, the DePaulia, and the director of development for DePaul’s student magazine, 14 East. At LH&amp;A, Lily has worked on website development, technology tutorials, and reinvigorating the intern how-to manual.