Explosive Creativity in the Second Half of Life 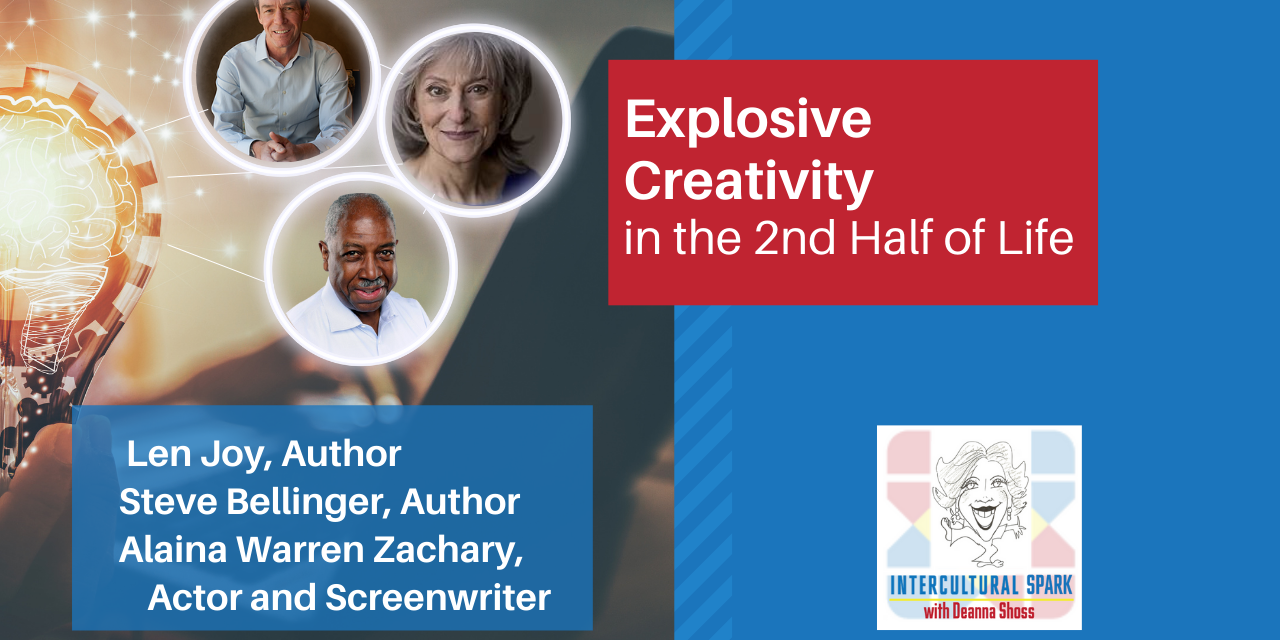 Len Joy wrote his first (of four!) books in his mid-50’s, after he sold his successful manufacturing business. Steve Bellinger, a self-proclaimed Trekkie, was 65 when he wrote and published his first book (also one of four!), a science fiction novel. Alaina Warren Zachary, a long-time actress who has appeared in commercials, on broadway and in movies, decided to focus on her writing 10 years ago, and has written a pilot for series.

All three are garnering all kinds of awards for their work along the way. For anyone who has said “I’ve always wanted to write a book,” this is the panel for you! Cliché or not, all three prove the point it’s never too late, you just have to do it!

Mom to ‘Sylvia’ and writer of ‘all that is Crankey’, Alaina has had an impressive career in many facets of ‘the industry’! She earned a BFA from Boston University and went on to appear in three major Broadway original cast musicals: Grease, Nine and Baby. She is on the Nine and Baby Albums.

Alaina was a member of the famed Cambridge-based improv troupe The Proposition. Alaina performed in hundreds of TV and radio spots and has over 100 acting credits. In her post-Broadway career, she won grant and recorded a CD of the never-recorded songs of French composter, Cecile Chaminade in 2001. She studied at the Mannes College of Music and sang with the Saratoga Opera and was a founding member of the Hudson Opera Theatre. In 2008 she relocated to Santa Fe and now resides in Albuquerque. She is active as an actress, writer and producer.

Her award-winning screenplay, ‘These Broken Wings’ took top honors in NM screenwriting competition and now, Crankey Village, her episodic homage to New Mexico, ll be a culmination of all her incredible talent and experience!

Learn more about the show at https://www.crankeyvillagetv.com/

Len Joy had an idyllic childhood, growing up in the gem of the Finger Lakes, Canandaigua, New York. As a typical small-town boy, he had a wide range of interests, most involving sports. He lettered in four sports in high school and went off to the University of Rochester with dreams of becoming a football hero and world-famous novelist.

When he awoke from those dreams, he switched his major from English to Finance. He quit the football team, but started dating one of the cheerleaders – Suzanne Sawada. Three years later they were married, and four decades later, they still are.

They moved to Chicago where Suzanne became a corporate lawyer and Len, with his MBA and CPA, became the auditing manager for U. S. Gypsum. Despite the thrill of auditing gypsum plants, Len found himself wanting a different challenge.

He bought an engine remanufacturing company in Arizona and for fifteen years commuted to Phoenix. Despite the travel, he managed to stay married and have three kids. While flying, he read hundreds of novels, which renewed his dream of becoming a world-famous author.

In 2004 he wound down his engine business and started taking writing courses and participating in triathlons.

While world fame remains elusive, Len has made advances in his writing career.

Joy’s first novel, AMERICAN PAST TIME, was published in 2014 and was the 2019 Readers’ Favorite gold medal award winner for Fiction – Sports and took 1st Prize in the Top Shelf Book Awards contest for Fiction – General.

His second novel, BETTER DAYS (2018), was described by FOREWORD Reviews as “a bighearted, wry, and tender novel that focuses on love and loyalty,”
and was the 2019 Readers’ Favorite silver medal award winner for Fiction – Sports and was a finalist in the Indie Excellence Book Awards in the category of Fiction: Midwest.

His third novel, EVERYONE DIES FAMOUS, was published by BQB Publishing in August 2020. KIRKUS described it as a “…a striking depiction of small-town America at the dawn of the 21st century.” It won 1st Prize in the 2020 Top Shelf Book Awards for Southern Fiction and was also a Book Excellence Award winner in the category of Aging.

Today, Len is a nationally ranked triathlete and competes internationally representing the United States as part of TEAM USA. His three kids (a son and two daughters) have grown up and moved away, although the daughters return frequently to Evanston to do their laundry and get legal advice from their mother.

Learn more about Len at https://www.lenjoybooks.com/

Stephen was born and raised on the West Side of Chicago by a single mom who worked nights for a printing company. She would bring home books and magazines to encourage us to read. This is how he discovered Isaac Asimov, Robert Heinlein, Arthur C. Clarke and the other masters of classic science fiction. It didn’t take long for him to get the itch to write. Over the years he’s written everything from newspaper articles, comic strips and radio drama to short stories and fan fiction.

One of the original Trekkies, Stephen and his wife Donna and plan to renew their wedding vows with a full Star Trek-themed ceremony; He’ll wear an admiral’s dress uniform, and she will be decked out in a custom-made leather-and-lace Klingon wedding dress.

The Chronocar is his first published novel. It won Best Indie Book Award in the Science Fiction category in 2018. In 2019 it won an Outstanding Fiction Award from the Independent Authors Network, and the Gold Medal Award for Young Adult Science Fiction from Readers Favorite. His second novel, Edge of Perception was released in August 2019 followed by e-Pocalypse in April 2020 and the final book in the series Time Waits For No One in August 2020. All of which are available in paperback, ebook and audiobook and published by Wordwooze Publishing.

Leam more about Stephen at https://stevebellinger.com/