Pick & Choose: Doing the Parts Your Love the Most 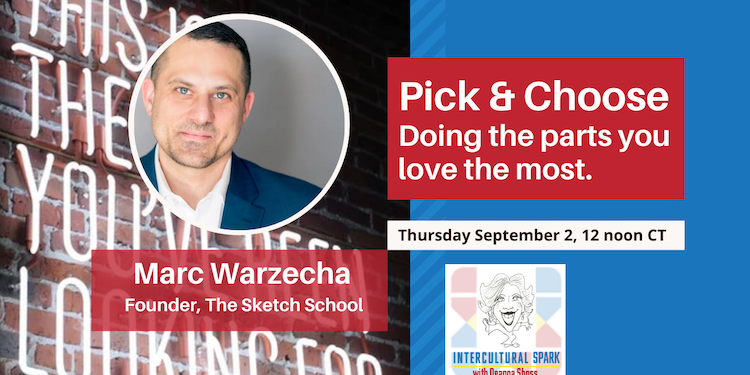 “There’s good and bad with every job” is something we’re led to believe is a sold fact of life. Marc Warzecha, former Second City writer, actor, improviser says “that’s not true!”

He turned in some of his hats (and reconciled that he could be successful without being famous), followed his passion and founded The Sketch School, the only training ground dedicated exclusively to sketch and shortform comedy, available online from anywhere in the world.

Internationally, Marc has been a guest instructor for the Comedy Central network in SPAIN, Yoshimoto Comedy in JAPAN, as well as NORWAY and LATIVA as a representative of the UNITED STATES EMBASSY.

Marc has facilitated workshops for a wide variety of corporate clients including INTEL, THE CAPITAL GROUP, FORD MOTOR COMPANY, DUKE UNIVERSITY, and DAVE AND BUSTERS.

Marc’ as been a guest on CNN’s “SITUATION ROOM with Wolf Blitzer” and NPR’s “ALL THINGS CONSIDERED.” Currently living in Los Angeles, he is a proud native Detroiter and Armenian.