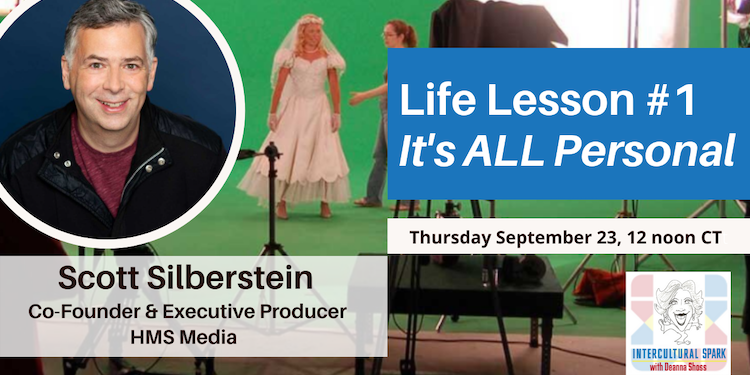 “I’m it for the long haul,” says Scott Silberstein, co-founder and executive producer of HMS Media, a 20-time Emmy Award winning media production company. “This is about how depth and relationships drive a lifetime career.”

HMS has produced for the everyone from Broadway and Hamilton to up and coming dance companies and local theaters. “We aim, we change, we charge ahead and empower,” says Silberstein, who started the company with his best friend who he met at summer camp as a kid.

33 years long and still going strong, Silberstein talks about entrepreneurship, staying the course and how that continues to fuel growth and what’s still to come.

Producing credits include The Hip Hop Nutcracker, Chicago Voices, Get Happy! Angela Ingersoll Sings Judy Garland, First You Dream, A Christmas Carol: The Concert, Second To None, Steppenwolf Theatre Company: 25 Years on the Edge, Dance For Life, The Chicago Dance Project, Every Dancer Has A Story, River North Rising, Reality of a Dreamer, Why Am I Hiding, Getting There: Jump Rhythm Jazz Project and Just Passing Through, an Emmy-nominated concert doc featuring Shawn Colvin, Julia Fordham and October Project. Scott has also produced and directed live performance shoots and short form content for hundreds of Broadway shows, tours, and regional performing arts companies, as well as segments for WTTW’s Artbeat Chicago and a public service announcement campaign about homelessness featuring the rock band Genesis.

A classically trained pianist who earned a piano studies certificate from London’s Guildhall School of Music at the age of twelve, Scott has won three Ruth Page Awards and been nominated for two Emmys for soundtracks, scores and sound designs for River North Dance Chicago, Zephyr Dance, Kast & Company and the Lynda Martha Dance Company, including Kira The Young Hunter with Phil Collins.

Scott is an Artistic Associate for the Tony Award® winning Lookingglass Theatre Company, a board member of Arts Alliance Illinois (where co-chairs the Arts Leadership Council and serves as a team leader for the National Arts Action Summit in Washington DC), a founding member of The Broadway League’s Governance Committee and publisher of the arts advocacy newsletter Arts in Action. He serves on the Inclusivity Council for Chicago Dancers United and Advisory Board for Giordano Dance Chicago, and is a past Vice-President of the SeeChicagoDance board of directors.