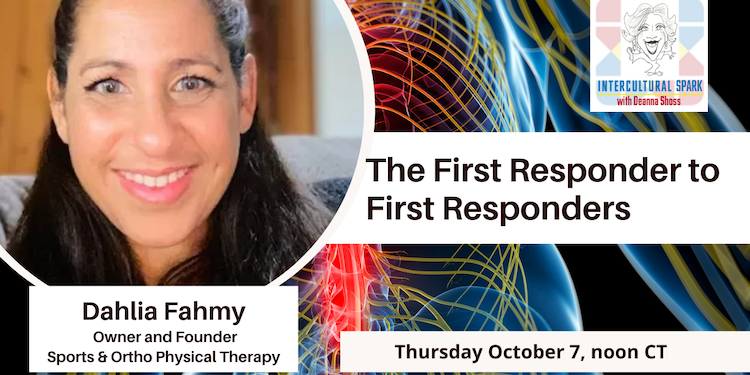 It all started when Dahlia’s dad gave her a hard time about getting her allowance. “I’ll just make my own money,” she thought. For Dahlia Fahmy, that means being the founder and owner of one of the largest woman-owned physical therapy practices in Chicagoland, Sports and Ortho Physical Therapy.

I found Dahlia when my back went out after sitting at a conference for three solid days. At the time she had a location at the end of my block. I couldn’t get in and out of a car, but I could slowly hobble down the street. That’s when I found “the muscle whisperer.” She has done extensive studying to magically (that’s how it looked to me!”) find the tip of the muscle that was the source of the pain. She stays at the forefront and the historic roots of her field, using manual manipulation, needling, cupping, stretching, training…whatever is necessary to help you recover (and, yes, she and her team did have me back doing a perfect cartwheel…thank you Sport & Ortho!)

See Dahlia transforms lives and keeps people at the top of their game with deep knowledge and industry innovation.

Dahlia Fahmy is the owner and founder of Sports & Ortho Physical Therapy which was established in 2003. Her main goal for starting the practice was to give her patients the type of care that she felt was lacking in the Physical Therapy world. That’s one that focused on providing one-on-one, manual-based therapy and functional exercises. Dahlia graduated from McGill University in Montreal, Canada in 1993 with a Bachelor’s degree in Physical Therapy. She has since worked with college football, hockey, and soccer teams as well as semi-pro football teams.

Since graduating Dahlia has focused on perfecting her skills in Orthopedics and Sports Medicine. She has taken several courses in Manual Therapy as well as completing her Manual Therapy Certification through St. Augustine University. She has also finished her level 1 dry needling certification. In 2012 she became a Fellow of Applied Functional Science, a title only held by less than 300 therapists in the world, making her a Movement Specialist and expert on biomechanics, allowing her to find the route of the problem, not just treat the symptoms.

As a dedicated clinician she is determined to see every patient get results, feel good about their care, and return back to their normal lives as quickly as possible. As a practice owner her mission is to surround herself with an elite staff of caring and highly trained therapists. Her goal is to build a practice that is highly regarded in the Orthopedic community as well as the community in which the clinics’ serve. Our hope is to also continue philanthropy and give back to the community that has rewarded us with their trust.