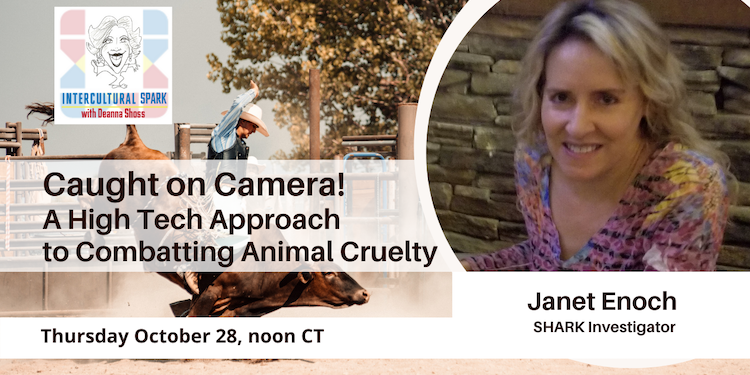 Janet Enoch, a Humane Investigator certified by the Illinois Department of Agriculture, has loved animals as long as she can remember. Janet has been working nationwide as an Investigator for SHowing Animals Respect and Kindness (SHARK) for the past 16 years.

SHARK specializes in using the latest technology including drones to document and expose animal cruelty and works to stop it; including the passing of anti-cruelty laws. Some of SHARK’s work will be featured in the upcoming Discovery+ Docuseries “Carol Baskin’s Cage Fight” on November 17, 2021.

The History of SHARK

SHowing Animals Respect and Kindness (SHARK) was founded in 1993 by former hunter Steve Hindi. As a “sportsman,” Steve hunted many species of animals both on land and in the sea. He killed for thirty years until the life-shattering day when, en route to shark hunting in the Atlantic Ocean, Steve attended the infamous Hegins pigeon shoot in Pennsylvania.

The slaughter of thousands of nonhuman victims, and the involvement of children in the horrific killings, was too much for Steve to tolerate. He vowed to stop pigeon shoots, and went on to dedicate his life to ending the abuse of all animals.

SHARK is a non-profit organization with supporters around the US and beyond. SHARK receives no government funding and completely relies on donations and grants to work on issues ranging in scope from local to worldwide.

With a small core of volunteers, and a staff of five, SHARK battles tirelessly against rodeos, bullfighting, pigeon shoots, turkey shoots, canned hunts (and all hunting), circuses, zoos, and marine parks… any issue that involves violation of the innate rights of living creatures.

SHARK also conducts animal rescues and education projects. Steve Hindi has an open invitation to debate “the opposition.” Because of his domination of past debates with animal abusers, however, it has been years since the opposition has taken him on.