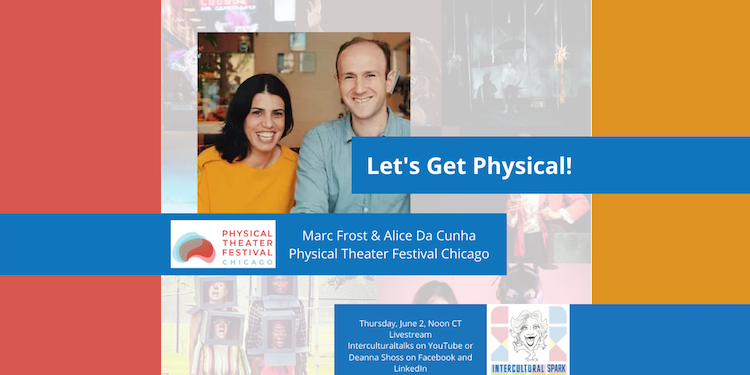 Alice Da Cunha and Marc Frost, partners in real life and in the theater, talk about creating the Physical Theater Festival in Chicago, global theater adventures and building a life and career together in the arts.

Tune in live on Thursday, June 2 at noon CT!

Alice has worked for various festivals. While in London, she was the Marketing Director for CASA (London’s Latin American Theatre Festival) and she produced, curated and presented SHORTCUTZ (a weekly short film festival). She was also the Production Assistant for TODOS Festival, an interdisciplinary festival in Lisbon, Portugal. In Chicago she has worked in Hospitality for the Chicago Latino Film Festival for the last two years. Alice is also an actress and has performed in many plays and films.

Marc has started two theater companies and one theater festival. At Tufts University, he co-founded Bare Bodkin Theater Company to give student playwrights a platform for their work. In London, he co-created and curated “Physical” (a scratch night for new pieces of physical theater). Back in Chicago, he founded Theater Unspeakable to create devised, physical theater.

More about the Physical Theater Festival

Physical Theater Festival is an annual contemporary, visual, and physical theater festival that presents new forms of theater that are being performed around the world. Physical Theater Festival began at Links Hall in the summer of 2014. The ninth annual festival will open on July 16, 2022 at Nichols Park for a free day of events and continue at the Den Theater until July 24.