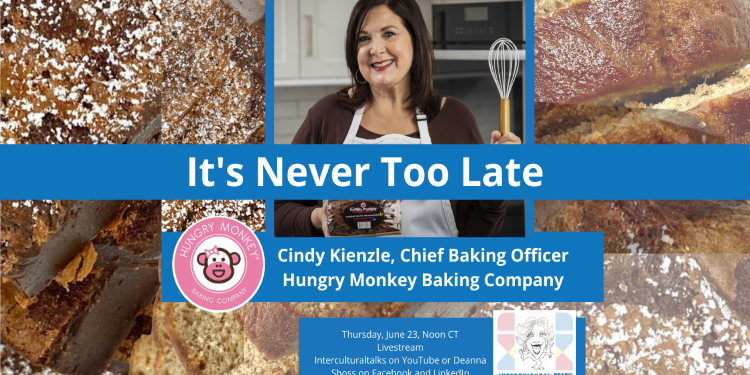 A husband at 47, a baby at 49 and her own business just shy of her 51st birthday, Cindy Kienzle, Founder and Chief Baking Officer at Hungry Monkey Baking Company, says it’s never too late to build the life you want!

As seen on talkshop.live, featuring the delicious banana bread, triple chocolate brownies and other products loved by THE Howie Mandel! (So delicious, I gained 5 pounds just planning this show!)

Hear how she does it, the tech and systems she uses and how she gives back.

Tune in live on Thursday, June 23 at noon CT!

Cindy started Hungry Monkey Baking in May 2010, on her daughter Lily’s 2nd birthday, after leaving her long-time career as the head of marketing, advertising and customer communications for a large, Chicago-based, organization. The company you see today began at a charity event in her hometown after her signature Chocolate Chip Banana Bread sold out two days in a row. Six weeks later she started selling it at the Northfield Farmers Market just north of Chicago. Three months later, Hungry Monkey was featured on ABC Chicago 7’s Hungry Hound; soon after they found themselves in Sunset Foods, a north suburban (Chicago) grocery chain, where they still sell today. Cindy is currently focused on building their online presence as well as their special event and corporate gifting programs. Cindy continues to expand the Hungry Monkey brand as Chief Baking Officer, CEO, recipe scientist, marketer, packer, amongst many other hats : ) Cindy lives in Lake Forest, Illinois, with her husband Tom and daughter Lily. In her early 60s, Cindy is just getting started!