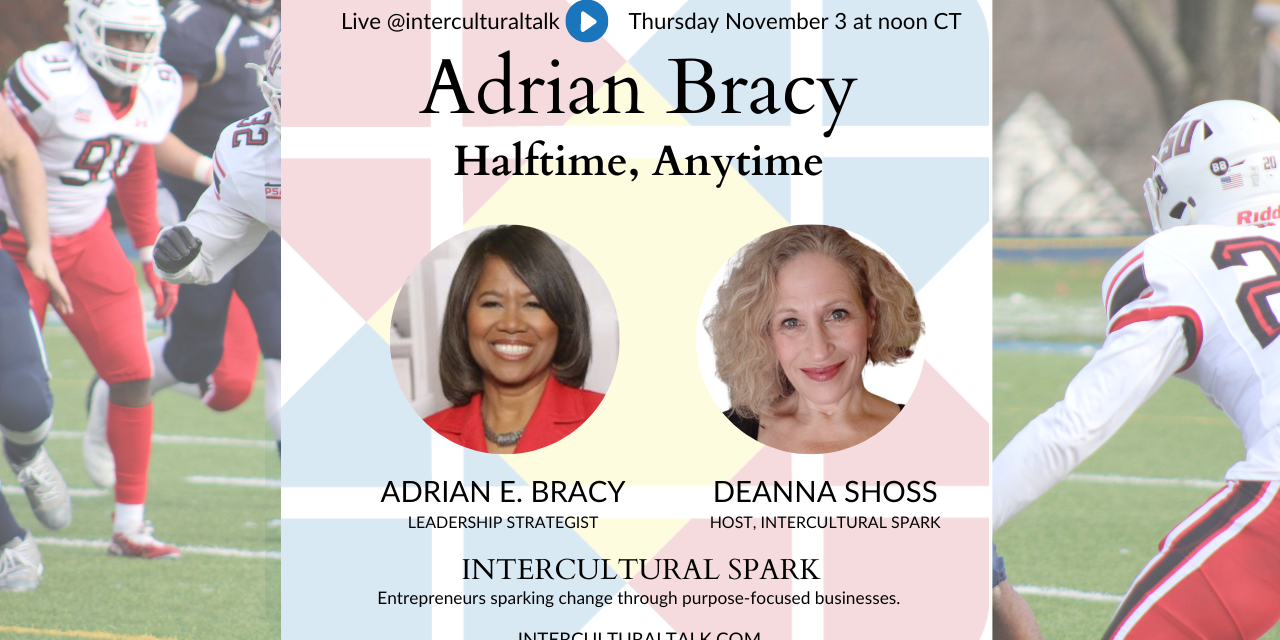 Award winning author, speaker and leadership strategist Adrian Bracy’s career includes 18 years in financial management for the NFL. She was CFO for the Arizona Cardinals before spending a decade with the St. Louis Rams. She then enjoyed another 10+ years as the CEO of the St. Louis YWCA.

Halftimes are different than second acts. It’s not about reinvention but rather looking at what’s working, what to change, and motivating the whole team to move forward successfully. It’s about breathing for a minute and then going onto the next period on that ongoing trajectory of engaging and succeeding in life.

Adrian and Deanna celebrate the adventure called life, as Adrian transitions from leading within an organization to running her own business. And, she shares her expert tips on leadership that she has garnered along the way!

Adrian E. Bracy, MBA, CPA, is an author, business and personal coach, consultant, and motivational speaker. Bracy spent 18 years in senior financial management with the National Football League, including Chief Financial Officer for the Arizona Cardinals. Prior to the Cardinals, she spent more than a decade with the St. Louis Rams. Bracy began her NFL career with the Miami Dolphins/Joe Robbie Stadium in her hometown of Miami, Florida.

Following her career in the NFL, Bracy transitioned to the nonprofit sector to follow her passion—that is, “to inspire and make a difference in the lives of women and girls.” She served as Chief Executive Officer of YWCA Metro St. Louis for nearly 12 years.

In July 2021, after more than 35 years in the corporate and nonprofit worlds, Bracy transitioned to the next chapter in her career, that of entrepreneur, by launching her coaching and consulting firm, The Bracy Group. As a coach, consultant, and speaker, her mission is to help women leaders embrace the greatness within as they inspire others to do the same. Her vision is “All women will achieve their fullest potential.”

Read the book! Halftime: Learn To Pivot as a Leader and Identify Your Next Step

Bracy has served on a number of non-profit boards, including that of YWCA prior to her employment there; Girls, Inc. of St. Louis; and YMCA of Greater St. Louis. She currently serves on The Missouri Botanical Gardens Sub-District, St. Louis Sports Commission, and the University of Health Sciences and Pharmacy.

Bracy graduated from Morgan State University in Baltimore with a degree in accounting and from Nova Southeastern University with a Master’s in Business Administration. She is a certified John Maxwell Coach, Trainer and Speaker, and is certified through the CaPP Institute (Coaching and Positive Psychology).

Bracy and her husband Vernon have one son, Donovan, and are members of Shalom Church (City of Peace). Bracy’s hobbies include golfing with her husband and son, traveling, reading books, and—most importantly—going to the spa with girlfriends.